Gavaskar apprehended that this incident could be one party's word against the other.

Former India captain Sunil Gavaksar feels some “action is due” in the controversy regarding James Anderson allegedly pushing Ravindra Jadeja during the Trent Bridge, terming the incident as “not good for the game”.

“I feel some action is due as prevention is better than cure. I think that the talks between two sides have failed as it has not dissolved anything. The Judicial Commission needs to come in with necessary investigation,” Gavaskar told NDTV on Wednesday.

Gavaskar apprehended that this incident could be one party’s word against the other.

“What happened in the lead-up to the dressing room is something that even TV cameras won’t be able to spot. So it will be one man’s word against the other,” he commented.

The legendary opener feels that the attitude in some quarters about these things “being good for the game” has led to more and more such incidents.

He cited the example of Roger Federer and Rafael Nadal stating that “one would never see Federer abusing Nadal even if he finds that the other has got lucky with a point. If it doesn’t happen in tennis, then why should it happen in cricket?”

The 65-year-old veteran said that he has been long enough in the cricketing world to understand that things have come to such a stage where cricketers are getting physical with each other setting bad example for aspiring ones.

“I have played more than one Test to know that there will always be a bit of chat but it has never come to such a situation earlier. Occasionally, a bowler would get carried away but nothing like what we see today. Now, youngsters watching this would feel that this is par for the course.”

Gavaskar feels that a match referee should speak to the rival captains before the start of the match and tell them in no uncertain terms that “I just want bat and ball to do the talking and no other talking”. 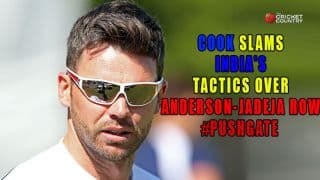