Deccan Chargers batted first on a typically slow and low Delhi track and managed to get to 168 for four in their 20 overs. While it will not be appropriate to say that they frittered away a good start, only 78 came off the last ten overs as compared to the 90 in the first half. 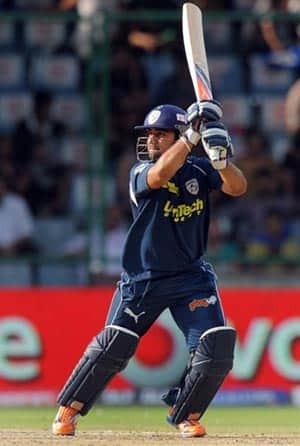 Deccan Chargers batted first on a typically slow and low Delhi track and managed to get to 168 for four in their 20 overs. While it will not be appropriate to say that they frittered away a good start, only 78 came off the last ten overs as compared to the 90 in the first half.

JP Duminy, who hadn t scored too many runs this season was replaced by Cameron White while Harmeet Singh came in for Ishant Sharma. Delhi got in Morne Morkel and Yogesh Nagar for Matthew Wade and Umesh Yadav.

Ashok Dinda had a poor start to the bowling as the Deccan openers carted him for three boundaries in the very first over of the innings.

Irfan Pathan pulled things back with the wicket of Dhawan, bowled off the inside-edge but Kumar Sangakkara and Sunny Sohal began to get going after having seen off the first few deliveries.

After a good first over, Pathan went for 10 in his second and the Chargers ended the Powerplay overs at 43 for one.

One would have thought that the introduction of spin would have stemmed the flow of runs given the cracking pitch at the Kotla. However, Shahbaaz Nadeem was clattered for a six and a couple of boundaries by Sangakkara and then Yogesh Nagar went for 13 in his opening over.

Patha s first over had cost him but the second went for 10 and the return to form was soon a distant hope as there were three more boundaries taken off him. The Chargers had reached 103 for one at this stage off the 11 overs bowled.

It was Dinda s third over that turned things around a little for Delhi. On 49, Sangakkara tried to go over the top but it took a leading edge and was caught while Nadeem s comeback over cost him only six.

The Chargers took the strategic time-out and immediately after that, Sohal blasted Morkel for a six and a four off the very first two balls.

Morkel, who had missed the previous game due to a stomach bug, clearly looked under the weather, as he had earlier misfielded and allowed a couple of boundaries.

It was Nadeem who ended Sohal s innings for 62 (41 balls) to push the side to 129 for three with five to play. The importance of the partnership for the second wicket and more importantly, Sohal s knock can be underlined by the fact that when he was batting, a total of 180 or even 190 looked achievable.

However, post his dismissal, the Chargers scored only 39 in the last 32 balls of the innings. Not that they did not have too many wickets; Sohal was only the third man out and the Chargers ended with only four wickets lost.