Hyderabad: The management of Sunrisers Hyderabad (SRH), who won this year’s Indian Premier League (IPL) championship, on Thursday met the Telangana Chief Minister K Chandrasekhar Rao and thanked him for his government’s support in conducting the matches in the state. The victory of Sunrisers in ninth edition of IPL was a matter of pride for Hyderabad and Telangana, a release from the Chief Minister’s office quoted Rao as saying. Sunrisers Hyderabad owner and Sun Group CMD Kalanithi Maran and other management officials were among those who met Rao, it said. Maran thanked the Government for extending support in conducting the matches in Hyderabad, it said. He also attributed Sunrisers’ success to the leadership of captain David Warner and the brilliant show by the bowling department. Full Scorecard: Royal Challengers Bangalore vs Sunrisers Hyderabad, IPL 2016 Final at Bengaluru

Maran also invited Rao to be the chief guest at the inauguration of the next IPL and also for the finals that would be held in Hyderabad. Rao accepted the invitation and expressed willingness to conduct the inauguration and conclusion of the next IPL on a grand scale. The Chief Minister also recalled his association with Kalanithi Maran’s brother and former Union Minister Dayanidhi Maran and wished progress for Sunrisers, the release added. READ: SRH win IPL 2016 Final against RCB by 8 runs

SRH defeated Royal Challengers Bangalore (RCB) by 8 runs in the IPL 2016 final. This was the first ever time that SRH have won the IPL since its inception few years back. For RCB it was the third appearance in a IPL final and they have lost all three. They lost their first final in 2009 against Deccan Chargers, then lost their next one against Chennai Super Kings in 2011. 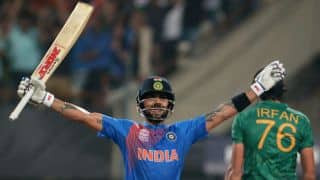