SRH will surely have the edge in Match No. 6 against GL, playing at their home ground against GL, but victory will not be easy.

Sunrisers Hyderabad (SRH) got the taste of the ultimate glory in Indian Premier League (IPL) 9 lifting the trophy for the first time. They started off their journey of IPL 10 like champions, winning the first match comfortably. Next up in front of them are Suresh Raina s Gujarat Lions (GL), who are coming off a defeat against Kolkata Knight Riders (KKR) in their first match in IPL 2017. SRH will surely have the edge in Match No. 6 against GL, playing at their home ground against GL, but victory will not be easy. David Warner will have to come in with a strong strategy that can stop the batting-heavy Lions from putting up a mammoth score on the board. Live Cricket Scorecard, Sunrisers Hyderabad vs Gujarat Lions – Match 6, IPL 2017

SRH s first victory was relatively easy as RCB played in absence of three of their star players, Virat Kohli, AB de Villiers and KL Rahul. GL, on the contrary, will be hungry for their first win and will attack with their full strength. While both Moises Henriques and Yuvraj Singh had scored half-centuries in the first match, a whole lot of credit for their victory goes to the bowlers who restricted the likes of Chris Gayle, Shane Watson and Kedar Jadhav to not play bigger knocks. The story this time will be different though.

The Lions faced the likes of Trent Boult, Sunil Narine, Chris Woakes and Kuldeep Yadav in their first game. They still played their brand of cricket, putting up good runs on the board for the bowlers to defend.. However, GL s bowling remained entirely disappointing against KKR as no one managed to pick up a single wicket. Warner s army gains point here as the batting looks strong enough to trounce such bowling unit. MI vs KKR, IPL 2017, match 7 preview: Red-hot KKR look to douse MI fire

Good news for SRH is that Mustafizur Rahman will now be available as his national duties are over. Again, the concern will be to accommodate him in the playing XI. Changing the winning combination might not be a wise thing to do and with overseas players like Henriques and Rashid Khan doing exceptionally well, it comes down to Ben Cutting, who might be rested if Mustafizur is brought in.

GL need to do some serious brain-storming to set their bowling attack up for this match. Bringing in Manpreet Gony ahead of in-form Nathu Singh has failed and needs reconsideration. Also, they will need spinners like Shadab Jakati and Shivil Kaushik to fire to win the matches.

The Rajiv Gandhi International Stadium at Uppal, Hyderabad has traditionally been a scoring wicket for shorter formats of the game, offering some assistance for spinners too. Rashid Khan for SRH and Jakati for GL will be the bowlers to watch out for in the match and a high-scoring match can be expected. 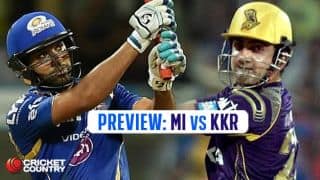