With IPL 2016 reaching its business end, as the playoffs kick off, the Eliminator is set to host SRH, who take on former champions KKR, at Delhi.

With the ongoing cash-rich Indian Premier League (IPL) 2016 reaching its business end, and as the playoffs kick off, the Eliminator is set to host Sunrisers Hyderabad (SRH), who take on former champions Kolkata Knight Riders (KKR), at the Ferozshah Kotla Stadium in Delhi on Wednesday. SRH, who managed to finish third n IPL 2016 points table, will be aiming to cross this hurdle after their previous appearance at this stage ended in a disappointment. While for KKR, they have never played an Eliminator before but their past record suggest they should not face many problems. FULL CRICKET SCORECARD: Sunrisers Hyderabad vs Kolkata Knight Riders, IPL 2016 playoffs, Eliminator at Delhi

Both the teams played their last game against each other, incidentally, as it more or less turned out to be a warm-up game before their Eliminator. However, either of the teams had any idea that they would be facing each other in the playoffs. Nevertheless, it was an intense tie; KKR turned up with a mission as it was a must-win tie, and with a 22-run win they sealed their playoffs spot. KKR have previously made it to the playoffs on two occasions, where they played the Qualifier 1 and on both occasions they made it to the final and won the title. SRH’s only playoffs appearance was few years ago, where they lost to Rajasthan Royals (RR).

Considering their performance in the previous tie, it was an even performance from both the sides. As for KKR, it was a decent performance with the bat, with Manish Pandey (48) and Yusuf Pathan (52)steered KKR towards a match-winning total of 171 for the loss of eight wickets in 20 overs. As for their bowling, it was their mystery spinner Sunil Narine, who finally bounced back to form, generating sharp turn on the Eden Gardens track and claiming 3 wickets for 26, thus playing a crucial role in KKR’s victory.

As for SRH’s performance, it was an even performance, as they performed steadily in the bowling attack, with Bhuvneshwar Kumar and Deepak Hooda claiming a couple of wickets each for 31 and 16, respectively. As for the batting, it was a shaky performance from almost all of the batsmen, except for Shikhar Dhawan, who played a sturdy knock of 51, as SRH finished on a total of 149, falling short by 22 runs.

Although the loss did not affect SRH much, a win would have ensured their place in the top two, while KKR could have possibly been on their way out. Therefore, going by the performance of the previous tie between the two, changes could likely occur for both the sides..

As for KKR, changes are highly unlikely as they undoubtedly have one of the most stable sides in the whole competition, especially in the batting order. However, the loss of Andre Russell due to a leg injury comes as a massive blow, and would be interesting to see if skipper Gautam Gambhir rushes him in to the squad, as he has been in tremendous form throughout the season. Apart from him, the other couple of changes could be in the form of Chris Lynn for Colin Munroe, who had an average performance in the previous tie, while Jason Holder too could miss out to either of Morne Morkel, Shaun Tait or Brad Hogg, if skipper Gambhir decides to move in with an extra bowlers or spinner.

As for SRH, the bowling department would most likely see a change in the form of Karn Sharma, who was expensive in the previous tie and could miss out depending on skipper David Warner’s call to move in with an extra spinner or fast-bowler.

Thus, with the game being held at Delhi, it is likely to remain slightly on the slower side, as the sides could move in with a bowling dominated side. Also, the short boundaries could work in favour of the batsmen to some extent, which puts KKR on the top on both aspects. As for SRH, it would be interesting to see how Warner, Dhawan and Yuvraj Singh capitalise, while KKR with a settled side, in both batting and bowling, definitely have the upper hand.  Nevertheless, with the game being an Eliminator, both the teams would fight it out until the end, and it indeed makes this a thriller to watch out for. 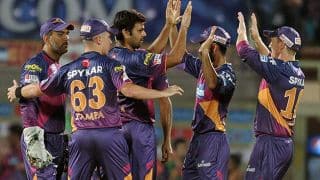 Virat Kohli, Anushka Sharma spotted together at Bengaluru ahead of Qualifier 1 of IPL 2016