A bench headed by Justice Dipak Misra also allowed BCCI to suggest three names after following the due process to represent it at the ICC meeting.

New Delhi: The Supreme Court on Tuesday asked the Centre and BCCI to suggest names in sealed covers for appointment in the committee of administrators to run the apex cricket body. A bench headed by Justice Dipak Misra also allowed BCCI to suggest three names after following the due process to represent it at the ICC meeting due in first week of February. The bench, also comprising Justices AM Khanwilkar and DY Chandrachud, made it clear that the names to be given for appointment in the committee of administrators and the representative for the ICC meet should be in consonance with the judgement and subsequent orders passed by the apex court in the matter. The bench asked BCCI and the Centre to give the names in sealed cover by January 27 and posted the matter for hearing on January 30.

Earlier, Haryana Cricket Association (HCA) supremo Aniruddh Chaudhary, who has been the treasurer of the BCCI, on Monday ,dropped in at the parent body s headquarters in Wankhede Stadium to have an informal chat with his colleagues. While a clearer picture is supposed to emerge after Supreme Court decides to announce the list of administrators, who will carry out the transition of BCCI as per Lodha Committee reforms, the two office-bearers, joint secretary Amitabh Chaudhary and treasurer Aniruddh Chaudhary may be required alongside CEO Rahul Johri for the timebeing.

Yes, Aniruddh came to the Cricket Centre today. He had an informal meeting with all the senior functionaries there including CEO Rahul Johri. Obviously, it was not like he resumed office but he did enquire if the current set of people running the show have any doubts regarding any domain. Obviously, there are a lot of accounts related works and one may require his help, a BCCI insider told PTI on Monday. 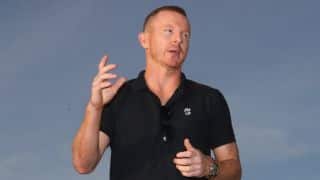