Suresh Raina scored a fluent 83 to lift India to a respectable total of 226 all-out in 49.4 overs, after the hosts suffered a batting collapse early on against England in the fifth and final One-Day International at the picturesque HPCA Stadium in Dharamsala on Sunday. 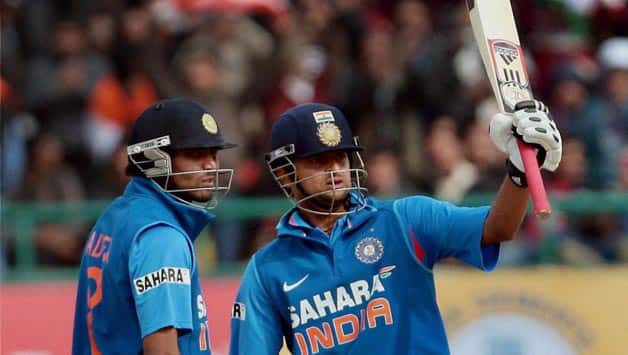 Suresh Raina scored a fluent 83 to lift India to a respectable total of 226 all-out in 49.4 overs, after the hosts suffered a batting collapse early on against England in the fifth and final One-Day International at the picturesque HPCA Stadium in Dharamsala on Sunday.

India, who are 3-1 up in the five-match series, collapsed against a disciplined England bowling attack, as none of their top-order batsmen, barring Raina, provided resistance.

Rohit Sharma, who scored a match-winning knock in the fourth ODI failed to continue his good run with the middle, as he was the first man to be dismissed by England pacer Tim Bresnan in the fourth over of the Indian innings.

Sharma faced nine deliveries and managed four runs before being caught by James Tredwell at the second slip.

The Yorkshire paceman struck on the very next delivery to dismiss Virat Kohli in the same manner, leaving India reeling at 13 for two.

From the other end, Gautam Gambhir showed aggressive intent by hitting two boundaries off Bresnan’s next over to take some pressure off the Indian side.

But lanky pacer Steven Finn had other plans as he got rid of Yuvraj Singh, getting him caught by Eoin Morgan at point. Yuvraj fell for a duck after facing three balls.

India slipped further when Gambhir fell to Tredwell in the 13th over, as India were reduced to 49 for four.

MS Dhoni and Suresh Raina joined forces to bail India out of trouble, and added 30 runs for the fifth wicket from 8.5 overs. Their partnership was broken by Finn, who trapped Dhoni in front of the wickets for 15.

It was due to a 78-run stand between Raina and Ravindra Jadeja that strengthened India after early blows. The two left-handers kept the England bowlers at bay and batted cautiously during their partnership which lasted for more than 17 overs.

Jadeja faced 65 balls for his 39, hitting two sixes and a boundary before falling to Tredwell on the fourth delivery of the 39th over.

Raina’s knock of 83, which was the backbone of Indian innings, came from 98 balls, studded with eight boundaries and two sixes.

The in-form Indian all-rounder slammed his fourth half-century in the five-match series, also bringing up 4,000 runs in ODI cricket.

Towards the end, Ravichandran Ashwin and Bhuvneshwar Kumar scored quick runs to take India to 226. While Ashwin scored 19 off 21 balls hitting a boundary and a six, Bhuvneshwar showed skills with the bat and clobbered five boundaries to garner 31 runs from 30 balls.

For England, Bresnan was the most impressive bowler with the figures of 9.4-1-45-4, while Finn and Tredwell bagged two wickets each.

Ranji Trophy: The heroes who held Mumbai’s fort when the big stars were away on national duty — Part 2 of 3