Suresh Raina, the India cricketer, has come out in public support of Kanhaiya Kumar.

Suresh Raina, the India cricketer, has come out in public support of Kanhaiya Kumar. Kanhaiya is a student activist and was recently caught up in a massive controversy for public speeches, which were deemed to be criminal. He is a Jawaharlal Nehru University Students Union (JNUSU) activist. On his release he made a speech that won the hearts of many. One phrase, where he stated he wanted ‘freedom in India as opposed to freedom from India’ caught public attention everywhere. You spoke of the corrupt practises happening India, and suggested that his very arrest was an outcome of highly corrupt governmental motives. ALSO READ: How Suresh Raina made Martin Crowe smile post chemotherapy in 2014

“It is not azadi from India, it is azadi in India [we want]… from the corrupt practices that are going on inside the country,” Kanhaiya was quoted as saying by the media. “The attack on JNU is a planned one as they want to de-legitimise the UGC protest, and to dilute the fight for justice for Rohith Vemula,” he added, as part of the same speech.

“We Indians forget easily but the drama this time was so big that we still remember all the ‘Jumla’ used during election campaign. If you speak against the government, their cyber cell will send your doctored videos and count the number of condoms in your hostel; 69 per cent people of this country voted against their ideology. Only 31 per cent are those who were fooled by their ‘Jumlebaazi’,” he had said as part of the same speech.

#kanhaiya on @ndtv right now… Beauty!!! Can just feel the honesty in every word..Respect him true fighter and honest man salute you

Raina was addressing to the televised version of the same speech, in praise of Kanhaiya. “#‎kanhaiya‬ on @ndtv right now… Beauty!!! Can just feel the honesty in every word..Respect him true fighter and honest man salute you,” Raina said on his Facebook account. 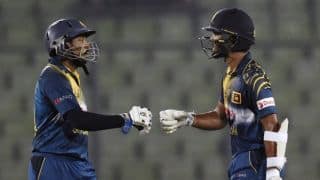