It was a day Suresh Raina will remember forever. His century affirmed the belief that he is one of the best in the format as Chennai Super Kings lifted their second Champions League T20 (CLT20) by beating the Kolkata Knight Riders by eight wickets in the final at Bangalore. This is Chennai’s fourth silverware in the cabinet. Chennai chased down 181 with nine balls to spare.

It was a Raina masterclass as he gave the Kolkata bowlers no room for error. Dwayne Smith was bowled in the first over by a good yorker by Pat Cummins, but Raina walked out to take control. With the spinners on, he used his feet and lofted them. If they erred in line, they were cut or pulled. It was a brilliant exhibition of bowling and though Brendon McCullum was going at a good rate, he looked slow when compared to Raina. The Sunil Narine-less Kolkata tried everything, even bringing Suryakumar Yadav to bowl.

Raina’s assault put Chennai on course and he marches along even after McCullum was dismissed. The innings should remain a highlight of this tournament as he absorbed the pressure after the early wicket and then smashed everything all over the place. From that point onwards, Raina and MS Dhoni finished it off in style with the former getting to his ton

In many ways, Kolkata’s inability to score in the middle overs came back to hurt them.  After getting off to a very good start with the openers putting up 91 inside the 11 overs, they stuttered a touch. Gautam Gambhir survived a chancy 80, and that helped Kolkata go on to score 180 for six. Manish Pandey also contributed with a quickfire 30. Pawan Negi was the star for Chennai as he took five for 22, which halted Kolkata’s charge. Three of those wickets came in the penultimate over of the innings.

Raina became the leading run-scorer in the CLT20 2014 during the whirlwind knock. Dhoni finished the game with two sixes in the penultimate over. 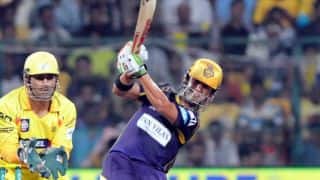