In a heartwarming gesture, former Test cricketer Surinder Amarnath coached inmates of the Sabarmati Central Jail in Gujarat for a T20 match against lawyers and judges as part of a welfare initiative taken by the authorities.

Surinder, eldest son of the legendary Lala Amarnath, prepared the convicts for a T20 match against a team of judges and lawyers.

In fact it was Surinder, along with Director General Of Police (Gujarat) P C Thakur, who came up with this innovative idea of making life a little better for the inmates of the jail.

The match which took place on Saturday saw a close fight between the legal fraternity and the convicts. The Legal Eagles scores 165 in 20 overs for the loss of seven wickets.

Giving them a tough fight, the jail inmates scored 146 in 20 overs at the loss of six wickets.

However, the winners trophy was handed over to the convicts for their effort after training for just five days.

The inmates team appreciated the hard work put in by Surinder Amarnath, who brought them level with the legal team in a matter of just five days.

People, who had not played for so many years, were made to go through fitness training, fielding practice and net practice by Amarnath. The former cricketers put in four hours every day.

In the end, most awards — including the best batsman, the best bowler and the winners trophy — were given to the inmates for playing the game in good spirit.

Mahesh Patel, a murder convict, scored a superb 46 for his team and was adjudged the best batsman. The best bowlers trophy was shared by three other murder convicts namely Ghanshyam Singh, Narendra Singh and Motibhai.

The convicts were then seen seeking autographs and posing for photographs from Amarnath, as he happily obliged. In the end, it was surprising to see the convicts get emotional as many were seen in tears as they bid goodbye to Amarnath. India tour of South Africa 2013: How important was the washed out tour game for the visitors? 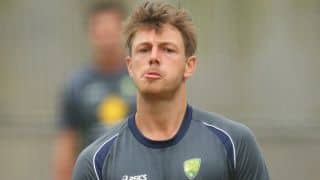