County Championship team Sussex announced signing of Australia international Travis Head for the 2020 season. The 25-year-old left-hander will be available to play in all formats.

Reacting to the signing, Sussex head coach Jason Gillespie said: “To have a high-quality international batsman like Travis on our staff in 2020 is very, very exciting.

“We wanted a top four batsman to improve our team and Travis will do that. He’s shown his class in his international career so far, he brings some useful off-spin and he will offer good leadership support to our captains from his time leading South Australia and the Strikers.

“We also felt it was important to sign an overseas batsman that would be able to join us for most of the season and give us some continuity. Next year’s international schedule leaves Australian players relatively free during the English summer, so Travis fits the bill perfectly.

“I’ve known Trav for a number of years. We have a really good relationship and after we decided here at Sussex that an overseas batsman would complement our squad next year I just knew that Travis would be ideal.

“I know he is excited, as are we, and I’m looking forward to seeing him put in some good performances for Sussex next year.”

Head who had been scheduled to join Sussex for a stint this season before he was selected in Australia’s Ashes squad said: “I was disappointed not to have been able to take up my contract this summer so was thrilled that Jason [Gillespie] and Keith [Greenfield, Sussex Cricket’s director of cricket] were keen to lock me away for the 2020 season. I can’t wait.

“With such a proud history, success is expected, and I want to play my part in achieving that. I look forward to seeing you all next summer. Get behind the Sharks!”

Head has played 12 Test matches for Australia, scoring 854 runs at an average of 42.70, including a top score of 161 against Sri Lanka in Canberra in February this year.

Head’s domestic career in Australia has seen him lead South Australia to Sheffield Shield finals in both 2015-16 and 2016-17 the state’s first since 1995-96 – as well as captaining Adelaide Strikers to their maiden Big Bash League title in 2017-18. 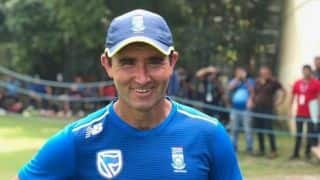