England pacer Tom Curran will turn out for Sydney Sixers for the Big Bash League that starts later this month.

England pacer Tom Curran will turn out for Sydney Sixers for the Big Bash League that starts later this month.

Curran becomes Sixers’ second England signing after Joe Denly, penning a contract for one year. The 23-year-old has played two Tests, 11 ODIs and seven T20Is so far since making his international debut in June 2017.

“I’m absolutely delighted to be joining the Sydney Sixers for the 2018-19 Big Bash,” Curran said on Tuesday. “Friends and colleagues have told me what a great team environment it is and how passionate the fans are and I’m hugely excited to experience this all for myself. I can’t wait to get to Sydney and hopefully help the team have a great season.”

Curran has also played in the Indian Premier League for for two-time winners Kolkata Knight Riders in 2018 where he played in five matches, taking six wickets. He was part of England’s limited-overs squad during their tour of Sri Lanka where he took six wickets in three ODIs. 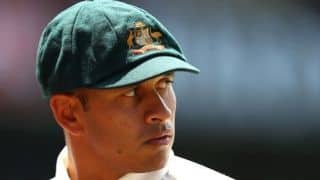