Dubbed as the "Next Warne" in Australian cricket circle, Lloyd Pope has joined Sydney Sixers for the upcoming season of Big Bash League.

Dubbed as the “Next Warne” in Australian cricket circle, Lloyd Pope has joined Sydney Sixers for the upcoming season of Big Bash League (BBL). The 18-year-old legspinners has made waves with remarkable performances in recent times.

He first rose to prominence during the ICC U-19 World Cup in New Zealand where his sensational bowling figures of 8/35 helped Australia defend a low 127 against England in the quarterfinals.

Then in the Sheffield Shield, Australia s domestic first-class competition, he became the youngest player in the tournament’s history to claim a seven-wicket haul as he finished with 7/87 against Queensland while playing in just his second match for South Australia.

Sixers coach Greg Shipperd expects the 18-year-old Llyod to be a potent addition to their spin-bowling arsenal. With spin an increasing weapon in T20, we have decided to bolster our options in this area and Lloyd has provided excellent results in his short career so far. I commend the SA supportive approach to our plan to sign Lloyd and trust that we will provide a suitable environment for his and our team progression, he said.

Adelaide Strikers, the current BBL champions and Pope’s local side, were expected to sign him up but due to their already folly stacked spin-bowling department boasting of Rashid Khan and Liam O Connor, they passed on the opportunity.

We have Khan, the best T20 player in the world, and a full squad of 18. We rewarded players on the back of winning the trophy last season. O Connor came into the final side when Rashid went and did a really good job for us, SACA high performance manager Tim Nielsen was quoted as saying by The Advertiser. Haven’t been near our best: Stuart Law 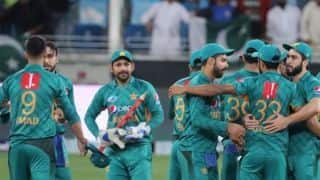 Pakistan vs New Zealand 2018, 1st ODI, LIVE Streaming: Teams, Time in IST and where to watch on TV and Online in India