With the recent win – their second in three games – Tamil Nadu are at No. 4.

In a low-scoring thriller at Surat, Tamil Nadu emerged triumphant after edging out Gujarat by one run in a Group B Round 4 match of the Syed Mushtaq Ali 2019 trophy on Monday.

Batting first, TN struggled to finish at t 125/6 with Arzan Nagwaswalla, Gujarat’s left-arm pacer, picking 3 for 11 in four overs. TN were in a spot of bother at 21/3 in the fifth over, but NS Chaturved (34), Washington Sundar (33) and N Jagadeesan (29) took them past 120. (ALSO READ: Akshay Karnewar hands Vidharbha win in a low-scoring affair)

In reply, Gujarat fell agonisingly short of the target after they were bowled out for 124 with one ball to spare. Washington Sundar took two for 10 in three overs to keep TN in the game.

For Gujarat, Chirag Gandhi fought a lone battle and was stranded on a fine 68 off 66 which included four boundaries and as many hits over the fence, but he received negligible support from the other end. Hardik Patel was run out off the penultimate delivery to hand TN a thrilling victory. (ALSO READ: Chhattisgarh win high-scoring thriller against Haryana)

With the recent win – their second in three games – Tamil Nadu are place at the fourth spot, while a first defeat meant that Gujarat slipped to No. 2. 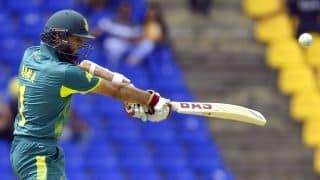