Saha was at his devastating best scoring a 37-ball 71 against Tripura.

Saha was at his devastating best slamming three sixes and nine boundaries for a 37-ball 71 to set the tempo, while Pankaj Shaw, Sanjib Sanyal and Arnab Nandi toyed with the Tripura attack to post a huge 196 for 5 after electing to bat.

Tripura were never really in the game and began disastrously to be eight for three that included in form skipper Yogesh Takawale as Ashoke Dinda (2 for 13) struck twice in two overs.

In no time they were reduced to 27 for 5 before Kaushal Acharjee put some life into the chase with a fighting 41 from 36 balls, but it was not enough as Bengal restricted Tripura to 124 for 8 in 20 overs for their third win in as many matches to virtually make the main round.

Saha put up 79 runs with Tiwary (25) before Shaw along with Nandi and Sanyal hammered Tripura attack in two entertaining partnerships of 43 from 27 balls and 40 from 13 balls respectively to surge the total.

Shaw hit four boundaries and one six in his 24-ball unbeaten 38, Sanyal slammed three fours and two sixes en route to eight-ball 25 not out, while Nandi too contributed a valuable 26 from 16 balls. 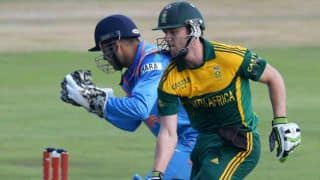