Delhi won the match with two overs to spare.

Mumbai: Delhi outplayed Jharkhand by five wickets for their first win in the Super League stage of the Syed Mushtaq Ali T20 Trophy, riding on Nitesh Rana’s unbeaten half-century to pull things back after being precariously placed at one stage here today. Put into bat, Jharkhand were restricted to 134 for seven in the allotted 20 overs. The side didn’t start impressively with opener Kumar Deobrat being dismissed for 13 by Delhi medium pacer Parwinder Awana at the Bandra-Kurla Complex. Sumit Kumar, who walked in at number 3, fell for just one run, thanks to a splendid catch by Pawan Negi. Syed Mushtaq Ali Trophy 2015-16: Samarth Singh powers Uttar Pradesh to 9-wicket win over Jharkhand

Saurabh Tiwary, who has played three ODIs, also went back to the pavilion quickly, managing just nine runs before being trapped in front of the wicket by Akash Sudan. Ishank Jaggi and opener Virat Singh then stitched a 62-run partnership for the fourth wicket. The stand was broken by spinner Manan Sharma when Virat was caught by Nitesh Rana. In the next delivery Kaushal Singh gave an easy catch to Unmukt Chand duck with the score reading 108 for five. Jharkhand kept on losing wickets at regular intervals.

Meanwhile, Jaggi,who hit four fours, fell for 42 after being caught by Rana off Awana. Shasheem scored just five as he was caught by Sudan off Awana again. Varun Aaron and Rahul Shukla remained unbeaten on 2 and 11 respectively. For Delhi, Awana was the most successful bowler, clinching three wickets. Manan Sharma took two, while Saini and Sudan took a wicket each. Syed Mushtaq Ali Trophy 2015-16: Aditya Tare guides Mumbai to 6-wicket win over Kerela

For Delhi, it was a horrendous start to their innings with openers Gautam Gambhir and Unmukt Chand falling cheaply for six and three, respectively. Delhi were struggling at 14 for three after Subodh Batti, who came in at number 3, was clean bowled by Aaron, who took two wickets in a single over. Dhruv Shourey along with Rana steadied the innings as they inched closer to victory. Shourey scored 30 before departing as he was caught by Rahul Shukla off Kaushal Singh, thus ending a 64-run stand.

A sloppy Jharkhand were still never in the fray as they dropped three catches. Meanwhile, Pawan Negi joined Rana to finish things off in 18 overs. Rana remained unbeaten on 60 and Negi on 24, finishing the match in style with a six. While Delhi will face Uttar Pradesh in a must-win encounter on Monday, Jharkhand have only pride to play for when they take on defending champions Gujarat here. 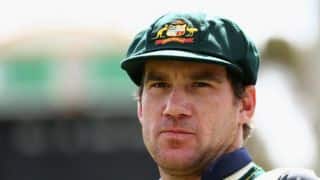