After restricting Manipur to 113/6, Delhi openers Unmukt Chand and Hiten Dalal knocked off the runs in just 11.4 overs

Delhi bounced back from their close defeat at the hands of Jharkhand on Thursday, with a 10-wicket hammering of Manipur in Round 2 of Syed Mushtaq Ali Trophy 2019 Group A match at the Devineni Venkata Ramana Praneetha Ground, Mulapadu on Friday. (ALSO READ: Jharkhand beat Delhi in last-over thriller)

After restricting Manipur to 113/6, Delhi openers Unmukt Chand and Hiten Dalal knocked off the runs in just 11.4 overs combining for an unbeaten stand of 119 runs for the opening wicket, handing their team four easy points.

Dalal hit 56 not out off 38 balls including ten fours and one six while Chand hit the winning runs, scoring an unbeaten 53 off 32 balls with the help of eight fours and a six.

Earlier, opting to bowl first, Delhi reduced Manipur to 24/2 in 3.2 overs with Ishant Sharma removing opener Mayank Raghav for four, followed by the wicket of Hrithik Kanojia for two, taken by Subodh Bhati.

Veteran Yashpal Singh and Prafullomani Singh added 54 runs for the third wicket to stead Manipur, before left-arm spinner Pawan Negi scalped Prafullomani for 25. Manipur’s lower-order failed to add anything substantial to the score even as Yashpal got to his seventh T20I fifty, He fell to Bhati for 50 in the final over of Manipur’s innings.

For Delhi, Bhati returned 3/15 in his four over while Ishant, Pranshu Vijayran and Negi claimed one wicket apiece. This was Manipur’s second straight loss of the campaign. 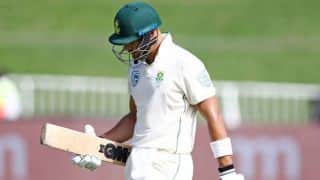