Punjab secured their first win of this season following a hat-trick of defeats.

Punjab, who had suffered a hat-trick of defeats, losing against Saurashtra, Mumbai and Madhya Pradesh, registered their first win as Shubman Gill and bowlers powered Punjab to nine-wicket win against Sikkim in the Syed Mushtaq Ali Trophy 2019 on Wednesday.

In the Group C clash, at the Holkar Stadium in Indore, the Mandeep Singh-led side outplayed Nilesh Lamichaney-led unit to seal the two points.

Sikkim s decision of opting to bat did not pay any dividends as Punjab struck at regular intervals to restrict Sikkim at 90/8. While Milind Kumar, who was the run-getter in the recently concluded Ranji Trophy with 1331 runs, was the top-scorer for Sikkim with 37 off 34 balls, other batsmen could only 56 runs. For Punjab, Baltej Singh and Krishan scalped two wickets each while Sandeep Sharma and Karan Kaila a wicket each.

Punjab then chased down the total in a canter with Gill, who recently made his India debut and who was Punjab s leading run-getter in Ranji Trophy 2018-19, slammed unbeaten 70 off 40 balls with the help of 7 fours and 3 sixes.

While Sikkim managed to dismiss Prab Simran Singh, Manan Vohra, pretty much playing a second fiddle to Gill, scored unbeaten 13 as Punjab won the game with nine wickets in hand and 9.1 overs to spare.

Punjab will next take on Goa on February 28 in Indore while Sikkim will face Railways on the same day. 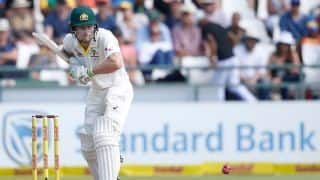