Jharkhand started the Super League stage of the Syed Mushtaq Ali Trophy with a nail-biting one-run win against Gujarat in Indore on Friday.

Jharkhand started the Super League stage of the Syed Mushtaq Ali Trophy 2019 with a nail-biting one-run win against Gujarat in Indore on Friday.

Gujarat were off to a bad start after losing openers Dhruv Raval and Priyank Panchal inside the first three overs. Piyush Tanwar and Karan Patel repaired some damage taking the score from 9/2 to 44/2 before being separated in the seventh over.

Karan, who had settled in hitting 35 with two fours and as many sixes, became the fourth wicket to fall over leaving Gujarat needing 85 runs to win from 60 deliveries.

Axar Patel (28) and Piyush Chawala (20) played handy innings to keep them in the chase. However, Anukul Roy (2/25) picked two wickets in an over as Gujarat lost three wickets for the addition of just three runs.

Gandhi struck three fours and a six in his unbeaten 23 off 11 but failed to take his team over the line.

Earlier, Jharkhand were given an excellent start after being put in to bat at the Emerald High School Ground. Anand Singh scored 45 off 36 while captain Ishan Kishan hit 19-ball 39 as the duo added 82 runs for the first wicket. 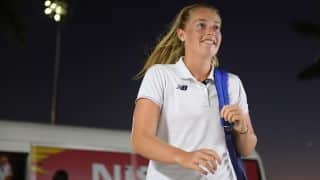