With Tamil Nadu needing 5 runs to win off one ball, Shahrukh pulled off a heist with a last-ball six to guide his team to a record third Syed Mushtaq Ali Trophy title.

Delhi: Masood Shahrukh Khan smashed a dramatic last-ball six to help Tamil Nadu defend the Syed Mushtaq Ali Trophy T20 title with a thrilling four-wicket win over Karnataka in the summit clash at Arun Jaitley Stadium, Delhi on Monday. Needing 16 runs off the last over bowled by Prateek Jain, power-hitter Khan kept his cool under pressure to clobber the final delivery over the deep-square leg to take Tamil Nadu to 153 for 6 and seal a famous win.

The burly 26-year-old right-hander remained not out on 33 (15 balls) while R Sai Kishore was 6 not out (3 balls, 1 four). Tamil Nadu thus avenged their heartbreaking one-run loss to Karnataka in 2019 final. This is the third time that Tamil Nadu has won the Syed Mushtaq Ali tournament, having previously won it in 2006-07 and 2020-21. The side had also made it to the finals in the 2019-20 season and ended up suffering a loss against Karnataka.

Thanks to their aggressive batting, Karnataka recovered on time after their batters were stifled by some good work by left-arm spinner Sai Kishore (3/12) and other Tamil Nadu bowlers.

Shahrukh Khan is the hero for Tamil Nadu, need 5 runs in the final ball and he smashed a six. What a hit, SRK in the Syed Mushtaq Ali final.

Tamil Nadu are the champions of Syed Mushtaq Ali Trophy 2021. What a win for them, what a final. #SMATFinal #smat2021 #SMAT pic.twitter.com/AeIie0R2nf

Karnataka slipped to 32 for 3 in the sixth over with Sai Kishore getting the big wickets of the consistent Rohan Kadam (0) and captain Manish Pandey (13, 15 balls, 2X4) while Sanjay Yadav nailed Karun Nair (18).

Tamil Nadu looked in control of proceedings and kept the opposition batters under check before some poor bowling by T Natarajan (1/44 from 4 overs), brought into the XI in place of P Saravana Kumar who took a fifer in the semi-finals, and Sandeep Warrier (1/34 in 4) gave away runs towards the end.

So so happy for another fantabulous season and defending our title.
The boys owned the season with a top-notch display of cricket. 👏
Can't wait to celebrate with you guys soon! 🥂#SyedMushtaqAliT20 #SyedMushtaqAliTrophy pic.twitter.com/pMTrAM5RYq

In their run chase, Tamil Nadu appeared to stutter after a bright start by opener C Hari Nishaanth (23 runs, 12 balls) before he was run out. N Jagadeesan, the other opener, struggled to force the pace, making 41 from 46 balls as did skipper Vijay Shankar (18, 22 balls).

The two were dismissed by spinner KC Cariappa (2/23) to put TN in a spot of bother.

Tamil Nadu slipped to 95 for 4 when Khan walked in. He revived the chase with a quick 21-run fifth wicket stand with R Sanjay Yadav (5). Yadav too fell while going for a big shot.

Tamil Nadu needed 30 runs from the last two overs and Khan kept their hopes alive with a massive six off Vidyadhar Patil’s final delivery of the 19th over.

In the final over, Sai Kishore hit a boundary off the first ball to ease the nerves. But the next four deliveries yielded seven runs, including two wides.

Jain, who was given the huge responsibility of bowling the last over of the final, could not prevent Khan from smashing a six from the last ball to take TN over the line. 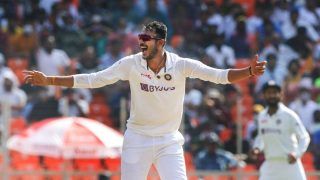 IND v NZ: Looks like Patels Are Winning Everything, Jokes Axar In Chat With Harshal