The duo blasted an opening stand of 121 in just 96 balls.

Gautam Gambhir led from the front with a breezy unbeaten 75 as Delhi cruised to a nine-wicket win over Haryana to record their fourth straight victory in a North Zone leg match of the Syed Mushtaq Ali T20 Trophy, in Chandigarh on Friday.

Set a target of 141 runs by Haryana, star pair of Gambhir and Virender Sehwag (49) once again sizzled with the bat for Delhi, putting on a 96-ball 121-run stand for the opening wicket to set the platform for the win.

While Sehwag’s was an unusually sedate knock, Gambhir was at his attacking best.

Gambhir’s runs came off 53 balls during which he struck seven boundaries and three sixes. Sehwag, on the other hand, played second fiddle and hit just three fours and one six during his 50-ball knock.

Sehwag was the lone Delhi wicket to fall, bowled by right-arm pacer Harshal Patel in the 16th over.

After Sehwag’s dismissal, Gambhir and Unmukt Chand (7 not out) ensured the win for Delhi with 15 balls to spare without any further damage.

Earlier, Haryana rode on half centuries from opener Avi Barot (51 off 42) and Guntashveer Singh (64 off 49) to post 140 for seven after opting to bat.

Apart from Barot and Guntashveer, no other Haryana batsmen could manage double digit scores. The duo scored 103 runs for the second wicket to propel Haryana to the modest score.

The lanky Ishant Sharma was the pick of the bowlers for Delhi with figures of four for nine from his quota of four overs. 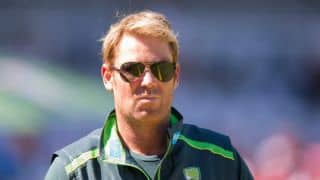 India vs South Africa semi-final: Clouds gather around Mirpur in lead-up to the match