Uttar Pradesh put in a dominating performance in their last Group E match of the Syed Mushtaq Ali Trophy 2019 beating Uttarakhand by 118 runs at the Palam B Stadium, New Delhi on Thursday, thus consolidating their top spot in the group.

Opener Samarth Singh and Akshdeep Nath starred with the bat to power UP to 209/6, before left-arm spinner Saurabh Kumar claimed 5/28 as Uttarakhand were bundled out for 91. Uttarakhand endured their second successive lost after a bright start to the campaign that saw them will four straight matches.

After being put into bat, Nath and Samarth added 123 runs for the opening wicket in just 13.1 overs. Nath scored 70 off 44 balls with ten fours and a six while Samarth notched up his third fifty of the tournament with a 48-ball 75 which included seven fours and three sixes.

Nath was the first to go to Uttarakhand skipper Rajat Bhatia while Suresh Raina failed to get going yet again and departed for just five to Sunny Rana. Priyam Garg made 15 off 6 balls before falling to Mayank Mishra while Rinku Singh’s 11-ball 28 propelled UP’s score past the 200- run mark.

In reply, Uttarakhand found themselves tottering at 16/3 with seamer Yash Dayal scalping skipper Bhatia (2) and Vaibhav Panwar (0), while sAurabh got rid of Vijay Sharma for five.

Opener Karnveer Kaushal made 22 off 15 but was the fourth wicket to fall, handing Saurabh his second wicket. Saurabh Rawat made 30 off 22 as Saurabh Kumar cleaned up the lower-order. Ankit Chaudhary finished with 3/9 while Dayal picked 2/11. 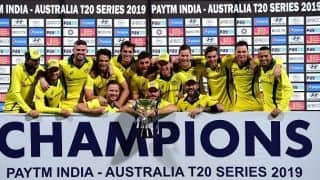