Odisha and Bengal secured thrilling last-over wins over their respective opponents in the East Zone leg matches of the Syed Mushtaq Ali Trophy.

Kolkata: Odisha and Bengal secured thrilling last-over wins over their respective opponents in the East Zone leg matches of the Syed Mushtaq Ali Trophy T20 tournament at Eden Gardens on Tuesday. Batsmen sealed a three-wicket win for Odisha in nerve-wracking 150-run chase against Jharkhand, while later in the afternoon, Bengal seamers trio of Kanishk Seth (3/23), Ashok Dinda (2/28) and Sayan Ghosh (2/20) put up a disciplined effort at the death to pip Tripura by five runs. Electing to bat, Bengal put up a lacklustre display with the bat as they were 49/4 before Manoj Tiwary (39) and Pankaj Shaw (39 not out) stitched a 61-run fifth wicket partnership before Debabrata Das propped the total to 152/7 with his 11-ball 23. Syed Mushtaq Ali Trophy: Tamil Nadu, Karnataka register wins

Tripura almost got past the target with Smit Patel steering their chase with a 33-ball 41 (4×4), before captain Manisankar Murasingh’s quickfire 27 from eight balls. Left-arm spinner Pragyan Ojha (1/36) leaked 17 runs from his last over with Murasingh hammering him for two boundaries and a six before being dismissed as the Tripura needed just 11 from the last two overs. But Bengal pace spearhead Dinda turned the match on its head with his twin bursts in the penultimate over when he dismissed Patel and Bunti Roy before Ghosh brilliantly defended five runs in the last over to start their campaign on a winning note.

Odisha, meanwhile, found a fine finisher in Abhishek Yadav who sealed the chase with a ball to spare. Anurag Sarangi laid the foundation with a strokeful 58 (6×4) but after his departure the 21-year-old held his calm and remained unbeaten on 26 (2×4, 2×6) for Odisha’s second victory on the trot. This was Jharkhand’s second loss as they went down to Assam by four wickets in their opening match. Put in, Jharkhand rode on Ishank Jaggi’s 47 and Kumar Deobrat’s 44 not out to post 149/5.

Odisha needed 15 runs from the last over as Jharkhand skipper Saurabh Tiwary trusted Shahbaz Nadeem over his seamers, a move that backfired as the left-arm spinner bowled a no-ball with Yadav hitting the winning boundary from the resultant free-hit. “We should have gone with a pacer in the last over, to get Nadeem on was a wrong calculation,” the Jharkhand opener Jaggi said. 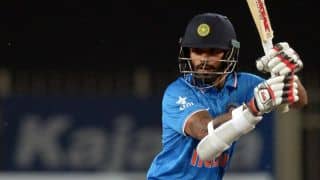