Bengal defeated Jharkhand by eight wickets in a comprehensive fashion for their second win of the Super League stage of Syed Mushtaq Ali Trophy.

Bengal defeated Jharkhand by eight wickets in a comprehensive fashion for their second win of the Super League stage of Syed Mushtaq Ali Trophy 2019 in Indore on Sunday.

After opting to bowl first at the Holkar Cricket Stadium in their Group A clash, Bengal restricted Jharkhand to 126/9 with Writtick Chatterjee returning the top figures of 3/12 while Shahbaz Ahmed (2/21) and Akash Deep (2/24) chipping in with a couple of wickets each.

Bengal’s chase was powered by an aggressive knock from opener Shreevats Goswami who did the bulk of scoring, remaining unbeaten on 86 off 50 to see through the successful chase.

Jharkhand’s innings never took off as they were jolted early with Akash removing opener and captain Anand Singh for 12 in the fourth over. Virat Singh and Ishank Jaggi took the innings forward, adding 41 runs for the second wicket before Writtick and Shahbaz ran through their batting order.

Shahbaz triggered the slide with the scalp of Jaggi (24) before Writtick struck in three his three successive overs to account for Saurabh Tiwary (5), Virat (27), Kumar Deobrat (10).

From 61/1, Jharkhand slumped to 85/6 and it took a decent 25-ball 37 not out from Anukul Roy to prevent them from folding for a much lower total than they eventually managed.

Goswami and Wriddhiman Saha (24) led an aggressive Bengal start before being separated in the seventh over. Varun Aaron took two wickets including that of Saha and captain Manoj Tiwary (7) but Goswami struck 12 fours and a six to ensure a smooth sail. Bengal won with seven overs to spare, finishing at 127/2. 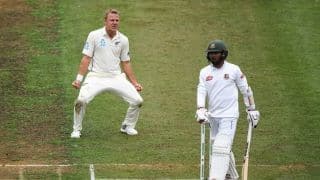