The return of Ben Stokes wasn t sufficient for Durham as they lost to Sussex by five wickets.

The return of Ben Stokes wasn t sufficient for Durham as they lost to Sussex by five wickets, missing out on a place in the final of the Vitality T20 Blast. The England allrounder, who seemed to be struggling with a niggle in a knee did not bowl, but playing as a specialist batsman, scored 34 runs. But his effort was trumped by Laurie Evans and Delray Rawlins, wo chased down Durham s target of 141 with nine balls remaining.

Stokes was initially ruled out of the match but later drafted into the team. He looked positive from the outset. Opening the innings, Stokes clobbered six boundaries and looked in good nick but once he was dismissed, out LBW to spinner Will Beer, the wheels came off. No other batsman could make a significant contribution and it was left to Ireland wicketkeeper batsman Stuart Poynter to push Durham to push the total to 140 with some lusty blows towards the end.

The slow-bowling pair of Beer and Danny Briggins combined to take four Durham wickets, including that of Tom Latham and Paul Collingwood. Tymal Mills and Chris Jordan produced economical spells, and even though Jofra Archer went for 40 in his four, Sussex s overall bowling was disciplined.

The absence of Stokes the bowler was evident as Durham began their chase. Fast bowlers Mark Wood and Chris Rushworth removed openers opening batsmen Philip Salt and Luke Wright, but no one could threaten to break the partnership that developed there onward. Evans and Rawlings accounted for a 70-run stand for the fourth wicket, and without Stokes, Durham resorted to Collingwood and Nathan Rimmington.

Both batsmen struck seven boundaries each and made steady progress without much fuss before Wood returned to dismiss Rawlins for 42. By then, Sussex required 43 off 51 balls. David Weise then partnered Evans but perished soon for 16 trying to finish the game. With eight needed, Evans cracked back-to-back boundaries off Graham Clark to place Sussex one win away from lifting the trophy and was fittingly named Player of the Match. 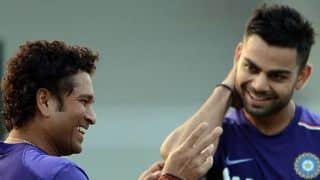