Cricket legend Sachin Tendulkar feels just like a bowling outfit, a batting side should also be penalised seven runs if they breach rules of the game during the course of a match.

“Whatever I saw, I saw for this for first time and then I started thinking what could be done and it cannot be a dead ball. But the rules are such, whatever happened it was the right thing to happen at that moment.

“But I was just thinking what could be that one change which can be implemented in time to come and I feel if three fielders are there in the circle, the umpire never tells them that you need to have the fourth fielder in the ring and it’s called a no-ball and there is a free hit. So the fielding side is penalised for that,” Tendulkar said. (ALSO READ: Cricket World Cup 2019: Kohli is lucky to have an experienced campaigner like Dhoni: Tendulkar)

“But when the batters don’t go to their respective ends, why isn’t the batting side penalised? I think the batting side should also be penalised. And what is the maximum that one could score off each ball is possibly 7 runs, which is a no ball of previous delivery and a free hit. So maybe here also it should be seven runs penalty for the batting side and then they change the ends.”

In Saturday’s game at the end of the 15th over, SoBo Supersonics were coasting along at 158 for no loss when Hersh Tank required medical attention after suffering cramps.

In the last ball of the 15th over, Jay Bista took a single but at the start of the next over, none of the players or umpires realised that it was Tank who was on strike and not Bista. (ALSO READ: Cricket World Cup 2019: Virat Kohli alone cannot win India the World Cup: Sachin Tendulkar)

After wrongfully taking the strike, Tank got out in the first ball. Sensing that the batsmen haven’t changed ends, the umpires called it a dead ball, denying the wicket to Aakash Tigers when the fault entirely lay with the batsmen.

Tendulkar said it was the duty of the off-field match officials to point out the mistake to on-field umpires.

“The umpires don’t tell the batters. With today’s technology the third or fourth umpire should be in a position to communicate with the leg-umpire and tell him the striker is supposed to be at the non-striker’s end,” he said.

“The batting side needs to be penalised for that and ensure that the ends are changed.” 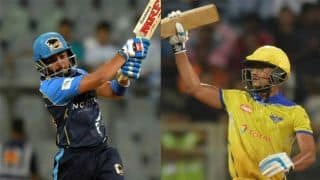 NMP vs SS, Final, T20 Mumbai, LIVE streaming: Teams, time in IST and where to watch on TV and online in India