Dubey claimed the tournament s first five-wicket haul as Lions bowled Knights out for 152. Dubey (47 not out) then combined well with Shetty (60 not out) to see Lions home with five balls and seven wickets to spare.

Opener Shetty continued his good form to score his second half century in two days to anchor the Lions chase. Although 153 is not a huge target, Knights bowlers did make things difficult for Lions with some very accurate bowling upfront. Skipper Siddesh Lad, coming in at No 4 eased some pressure of the chase with a useful 30, followed by the Dubey-Shetty show.

With 48 runs needed off the last four overs, it seemed to be anybody s game. Dubey and Shetty hammered 20 runs of the 17th over, bowled by Akshay Parkar to bring down the equation in their favour.

Dubey then smashed two more sixes in the next two overs to ensure that Lions crossed the finishing line comfortably.

Having lost too many wickets early in their opening game, Knights openers batted cautiously at the start. Praful Waghela and Sumit Ghadigaokar played risk free cricket to take Knights to 36 for no loss at the end of Power-play overs.

It was also credit to the Lions new ball, bowlers, especially Siddharth Raut, for not giving any easy boundaries to the Knights openers in the Power-play. The openers changed gears after Power-play, and added 34 more runs in the next 3.2 overs. Ghadigaokar was the first man out, dismissed by Dubey for 36 off 26 balls.

Skipper Suryakumar Yadav, coming in at No 3, started with a four off the very first ball he faced. And the talented batsman didn t drop his guard for the rest of his knock. It was a highly entertaining knock as long as it lasted; the Knights skipper hitting five fours and two sixes for his 35 off 15 balls. Yadav s 45-run stand from exactly four overs with Waghela put Knights on course for a 170-plus total.

But Dubey turned things around by getting rid of Yadav and Waghela in the space of five balls. Waghela scored 42 from 40 balls, hitting five fours in the process. Left-arm spinner Shams Mulani and wrist spinner Raunaq Sharma then took three wickets between them to put further breaks on the Knights scoring.

From 115 for 1, Knights lost their next nine wickets for just 37 runs in 6.4 overs. Dubey finished with figures of 5-24 from his four-over spell. 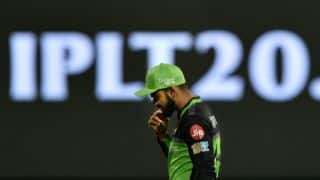