England's Tammy Beaumont has said that the exit from the T20 World Cup semi-final due to an abandoned game would hurt the side for a long time to come.

England’s Tammy Beaumont has said that the exit from the T20 World Cup semi-final due to an abandoned game would hurt the side for a long time to come.

England and India were slated to clash in the first semi-final of the T20 World Cup at the Sydney Cricket Ground, but the match had to be abandoned due to rain, and as a result, India progressed to the finals of the tournament.

“Going out on a washout, a rain-affected game, it’s still hard to put into words how you feel about it. The raw emotion of when I’ve played in semi-finals and lost before is more obvious almost. This one’s going to burn and be annoying and niggly over a long period of time, almost until we get the chance to play again,” ESPNCricinfo quoted Beaumont as saying.

“You can argue until the cows come home we should have had a reserve day, but at the same time we also should have beaten South Africa and come top of the group and then we wouldn’t have been on the wrong end of it,” she added.

England had lost their opening match against South Africa in the T20 World Cup.

If the Three Lions had beaten South Africa, then the result might have been something else.

England’s women team were due to return to full training on April 14, but the current situation regarding COVID-19 has put those plans in disarray.

“I have been quite open in saying that I’ve always been more comfortable in the top order or opening or batting at No. 3 so I think that was nice to go back to what I know,” Beaumont said.

It's Been 13 Years And I'm Still Waiting For a Call From Chennai Super Kings: KKR Skipper Dinesh Karthik 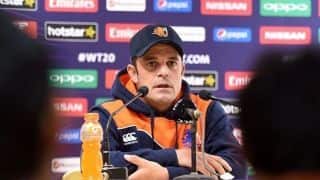