On a high after making it to the final of the women's World Twenty20 tournament beating New Zealand, West Indies skipper Stafanie Taylor on Thursday heaped praised on her team and termed the victory fantastic.

Mumbai: On a high after making it to the final of the women’s World Twenty20 tournament beating New Zealand, West Indies skipper Stafanie Taylor on Thursday heaped praised on her team and termed the victory fantastic. Batting first, riding on Britney Cooper’s quickfire 48-ball 61, the West Indies posted a competitive 143/6 in 20 overs. In reply, New Zealand were never in control of the game as they lost wickets at regular intervals and could manage only 137/8 in their 20 overs. FULL  CRICKET SCORECARD: New Zealand vs West Indies, Semi-Final 2, ICC Women’s World T20 Cup 2016 at Mumbai

Stafanie Taylor (3-26), Shaquana Quintyne (1-11), Afy Fletcher (1-20) and Shamilia Connell (1-22) were the pick of the bowlers for the West Indies. “We played fantastic today. I think 143 was a descent score. Full credit goes to the team the way they played. Britney played a very good knock and took on the bowlers,” Stafanie said at the post-match press conference here at the Wankhede Stadium. West Indies beat New Zealand by 6 runs to enter final of Women’s T20 World Cup 2016

The West Indies women will now take on Australia eves (who earlier defeated England in the first semi-final on Wednesday) in the summit clash of the tournament at the Eden Gardens on April 3. “We played Australia in the semi-finals (in previous World T20s) and now we play them in the finals, they are a good and tough team, if we are consistent and play it like today, and bowl well against them we fancy our chance,” the skipper said.

Video: Ravichandran Ashwin thanks fans and followers for their massive support 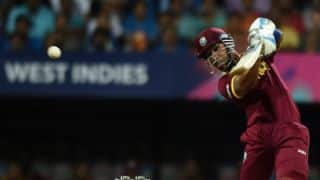