The company has come up with yet another attractive topical that praises Kohli's mesmerizing knock.

After taking his team to victory against Australia in the most crucial match of ICC World T20 2016 so far for India, Virat Kohli has become everyone’s talking point and Amul is not far behind with their topicals. After showing their support towards Amitabh Bachchan after he sang the national anthem for the side, the company has come up with yet another attractive topical that praises Kohli’s mesmerizing knock. After a disastrous fielding performance in the first innings, it was Kohli who took on the responsibilities following a top-order collapse and scored an unbeaten 82 off 51 balls and turned the savior for India. FULL CRICKET SCORECARD: India vs Australia, Match 31, ICC World T20 2016 at Mohali

India, who won the inaugural tournament in 2007, are gunning to become the first nation to clinch the title twice and the first ever on home soil. Australia’s hopes of winning their first World T20 trophy are once again in tatters, with the top-ranked Test side now bowing out of the tournament. Chasing Australia’s challenging total, India had looked down and out at 94-4 but Kohli and skipper Mahendra Singh Dhoni (18 not out) put on 67 runs to take the team to the finish line. The 27-year-old Kohli planned his knock to perfection, mixing caution with aggression to smash two sixes and nine fours in a pressure-cooker atmosphere at the packed Punjab Cricket Association ground. “This innings has to be in my top three, perhaps the top right now because I’m a bit emotional,” Kolhi, named man of the match, said, as reported by AFP. Dhoni, who effected three dismissals, hit the winning four with five balls to spare to trigger wild celebrations in the stands. Shane Watson’s international career ended in disappointment although the retiring Australian all-rounder did well to grab two key wickets and a spectacular running catch.

India were put to chase 160 put up by the Aussies, courtesy a cracking start by their openers Usman Khawaja and Aaron Finch who took the team score to 50 within the initial 4 overs. The bowlers made a comeback but couldn’t restrict the opponents within 150. Indian openers started the chase well but departed quickly while it was Kohli who stood there like a rock and took India to the much wanted victory. Skipper MS Dhoni as usual did very well behind the stumps while provided the Test vice-captain the support he needed. India faced a blow as they will miss experienced Yuvraj Singh who got injured during the match. Manish Pandey has been called in as back-up as India take on West Indies in the second semi-final at Wakhede Stadium, Mumbai on Thursday. 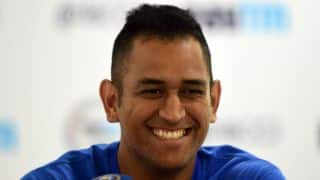 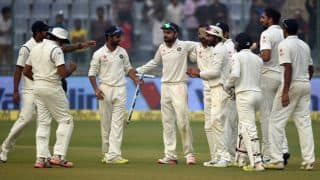