Sri Lanka has got off to a disastrous start with Tillakaratne Dilshan,DInesh Chandimal and Lahiru Thirimanne for just 41 runs against West Indies.

Sri Lanka have gotten off to a poor start losing as many as three-wickets in the initial 6.1 overs with just 41 runs on the board against West Indies in Match No.21 of the ongoing ICC T20 World Cup 2016 at at M.Chinnaswamy Stadium, Bengaluru. Winning the toss West Indies put Sri Lanka into bat started off well getting as many as 19 runs from the first two overs. It was all down-hill from then, first with the wicket off Tillakartne Dilshan for 12 runs. Carlos Brathwaite came into bowl his first over, struck off the first ball, getting him leg-before wicket. Replays suggested that ball was missing the leg-stumps. Live Cricket Scorecard: Sri Lanka vs West Indies, Match 21, Group 1

Second wicket to fall was Dinesh Chandimal,who in trying to make a quick run was out paced by Johnson Charles, who came in running from covers. Chandimal made only 16 runs. Third wicket to fall was Lahiru  Thirimanne, who was looking good smashing a boundary facing his very third ball. Thirimanne in an attempt to get the quick runs, got out to Samuel Badree tyring to go over the covers, only managing it to the hands of  Andre Flecter, he was on just five.

Sri Lanka will start as favourites, but West Indies, who are ranked No. 2 in the world have quite a few hard-hitters and will not go down that easy. Both teams have their own share of history in ICC World T20. While West Indies won the ICC World T20 in 2012, Sri Lanka winning it in 2014. 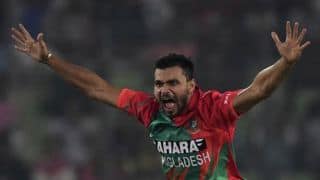