Women's cricket changed forever on Sunday as a record 86,174 fans checked into the iconic MCG to watch India vs Australia T20 WC final.

The highly-anticipated final of ICC Women’s T20 World Cup 2020 on Sunday between India and Australia will always be remembered for changing the face of women’s cricket globally. The India vs Australia final was played in front of the record 86,174 fans as the hosts lifted their record-extending fifth title in Melbourne. The final may have fallen just short of beating the world record attendance for a women’s sporting fixture, but the sea of fans filling the historic MCG is a sight for any sports fan to behold.

Five years in the making, the occasion lived up to its billing by setting a new attendance record not just for a women’s sporting event in Australia, but for women’s cricket globally. In the six previous editions of the tournament, the highest final crowd came in 2009 when 12,717 watched England beat New Zealand in Sydney. And seeing 73,000 more turn up in Melbourne for the same event 11 years later is a true testament to how far the game has come, the ICC said in a statement.

“I never thought I’d be playing in front of a crowd like this,” said Australia’s Ashleigh Gardner. “It was amazing to have all those people before us.”

What the match had achieved was apparent before the stadium gates had opened as fans streamed into Melbourne Park in their hundreds up to seven hours before the first ball was bowled.

Seas of yellow and blue engulfed the concourse as fans from all walks of life – male and female, boys and girls, young and old – came together through a love of cricket. But it was when those fans entered the bowl that the real weight of the achievement hit home.

The noise was deafening from the offset – let alone when Alyssa Healy hit back-to-back sixes to set Australia on their way to lifting the title on home soil.

Since the 2018 tournament, there has been a 1600 per cent increase in viewing minutes in Australia while the ICC’s digital and social platforms have attracted an unprecedented 701 million video views to date – 600 million more than the 2017 50-over tournament recorded overall. 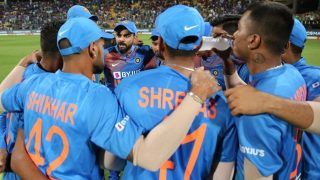