Maxwell have gone with players of the present and past in his Top 5 T20 picks.

Abu Dhabi: Australia’s star batsman, Glenn Maxwell have gone with the likes of Rashid Khan, Andre Russell, Ben Stokes and Australians Adam Gilchrist and Shaun Tait as his top-5 T20 players for his world cup side in a video posted by ICC on Wednesday. Being an all-rounder himself he has gone with few all-rounders in the list.

The former Punjab Kings batsman have gone with former Afghanistan captain and SRH leggy, Rashid Khan as his first pick.

“Genius spinner, good with the bat as well, someone who can field,” Maxwell said in the video.

His second pick was West Indian juggernaut, Andre Russell. “He bowls fast, hits the ball out of the park, an extremely powerful player. He’s unbelievable in the field, someone who’ll add anything to any T20 side.”

Next up was 2019 World Cup winner and England all-rounder, Ben Stokes.

“Another All-rounder, gives you so much in the field, can do anything with the bat and scores all around the ground,” the RCB batter told.

He went for two former Australian internationals as his final two picks. First up was Australian legend, Adam Gilchrist who also happens to be one of Maxwell’s favourite cricketers.

“He’s gonna be my wicket-keeper and will be at the top of the order. He is one of my favourite players to watch who gets off to a flying start, hits the ball miles and I would love to have him in my team.”

Finally he went for former Rajasthan Royals pacer, Shaun Tait as his premier bowler for the team.

“Having played against him, I know how quick he was. Even at the backend of his career, he bowled absolute rockets. I think he’ll certainly strike fear in any batter at the other end,” the Australian all-rounder concluded. 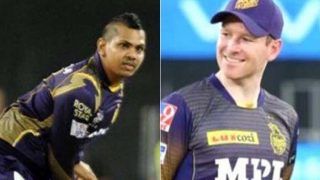