Tamim Iqbal becomes Bangladesh’s leading run-getter in one-Day Internationals (ODI) during the first ODI between Bangladesh and Pakistan at Dhaka. He has also scored his 29th ODI fifty in the process.  Timim has overtaken his stand-in skipper Shakib-al-Hasan, who will get his chance to reclaim the top spot once he comes on to bat a little later. Live Blog:  Bangladesh vs Pakistan 2015, 1st ODI at Dhaka

Tamim and Shakib have been in a constant battle, but Tamim has the upper hand now and will look to convert this into a big century. Bangladesh will want to win this and carry on their momentum from the ICC Cricket World Cup 2015, where they reached the knockout stages for the very first time. Bangladesh vs Pakistan 2015, Free Live Cricket Streaming Online on PTV Sports (For Pakistan users): 1st ODI at Dhaka

Earlier Bangladesh had won the toss and elected to to bat first. Bangladesh are without their regular skipper Mashrafe Mortaza, who is serving a one-match ban for slow over-rate. Pakistan welcome back their star spinner Saeed Ajmal, who returns to the playing XI after a gap of seven months. He seems to have mended his action as he seems to be bowling with a more round arm action.  Bangladesh vs Pakistan 2015, Free Live Cricket Streaming Online on Gazi TV (For Bangladesh users): 1st ODI at Dhaka 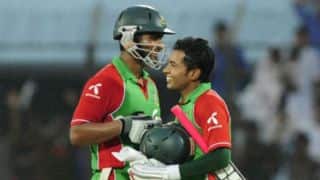