Tamim Iqbal was ruled out of the reminder of the tournament after fracturing his left wrist against Sri Lanka on Saturday.

Bangladesh were dealt with a huge blow in the tournament opener of the 2018 Asia Cup after opener Tamim Iqbal was ruled out of the reminder of the tournament. He fractured his left wrist against Sri Lanka on Saturday.

The 29-year-old is likely to be out of action for at least six weeks. The opener was sent to a nearby hospital in Dubai after being hit on the left wrist by pacer Suranga Lakmal in the second over of the match.

He has been sent to hospital for scanning, informed team manager Khaled Mahmud shortly after the incident as reported by thedailystar.net.

Tamim had sustained an injury on his right hand index finger during a fielding drill while Bangladesh’s top two players Shakib Al Hasan and Mushfiqur Rahim are also not 100 per cent fit.

Bangladesh were rocked early, losing two wickets in the first over. The returning Lasith Malinga had sent back Liton Das and Shakib Al Hasan in back to back delvieries before Tamim had to walk off the field retired hurt for two.

However, Mushfiqur Rahim and Mohammed Mithun steadlied the ship with a century stand before Malinga came back to dent Bangladesh further with two quick strikes. 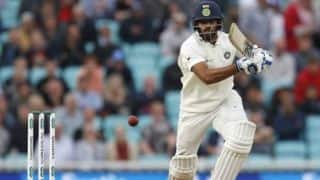