Teachers Day is celebrated as a tribute for the valuable contribution that teachers make towards the society by imparting knowledge and enlightening their wards. The best example has been the relationship of Sachin Tendulkar and his coach Ramakant Achrekar in the formative days. 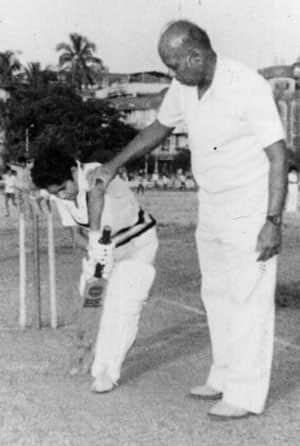 Sachin Tendulkar with his coach Ramakant Achrekar during his school days

Teachers Day is celebrated as a tribute for the valuable contribution that teachers make towards the society by imparting knowledge and enlightening their wards.

In cricket too, teachers (coach) play an important role in shaping the career of their students. The best example has been the relationship of Sachin Tendulkar and his coach Ramakant Achrekar in the formative days.

Achrekar, who has been credited for producing several international cricketers like Praveen Amre, Vinod Kambli and Ajit Agarkar, is highly revered by the little master.

It was on the advice of the Dronacharya award winner that Tendulkar changed his school to Shardashram Vidya Mandir in Dadar – close to Shivaji Park. It turned out to be a turning point in master blaster s career.

A couple of years back when Ramakant Achrekar was felicitated along with his favourite student at a function in Nagpur, Tendulkar recalled an incident from his school days.

Achrekar had asked the now highest run-getter to play for his school team. Instead of being on the field, Tendulkar chose to cheer his schoolmates. In the evening when Achrekar asked him how many runs he had scored, Tendulkar was stumped.

Tendulkar honestly told him that he was cheering his Team. A raged Achrekar slapped him which made him realise his mistake.

“Achrekar Sir said ‘don t just clap for others, play for yourself and concentrate on your batting ,” Tendulkar said. “That incident changed my life and whatever I am today is because of his coaching and match practices that encouraged.”

Another famous coach-player association was that of Terrence Jenner, fondly known as Terry Jenner and that of legendary Australian spinner Shane Warne.

It was under this former cricketer s tutelage that Warne became one of the world s finest spinner. The two developed a strong bonding over the years with Jenner seeing much of himself in his prot g , Warne.

After a poor performance on his debut against India in 1992, Warne visited his mentor with bottles of beer. Jenner lambasted Warne for not taking the game seriously. The dressing down saw Warne improve himself as a bowler.

Next year, Warne bowled Mike Gatting with a beauty of a delivery which became known as “The bowl of the Century”.

From then on, it was no looking back for Warne, who went on to become the highest wicket taker in Test cricket, which was eventually overhauled by another genius Muttiah Muralitharan.

Kapil Dev is known for leading India to a famous World Cup win in 1983 over the then mighty West Indies team. With his all-round skills, Kapil won many matches for India. And by the end of his career, the former India captain had taken 434 wickets at 29.06 and had a batting average of over 30.

But none of it would have been possible without the work ethic that was instilled by his legendary coach Desh Prem Azad.

At the age of 14, the former India all-rounder came in contact with Azad, who was not among the top coaches in the city of Chandigarh. His training method was simple: to bowl a lot.

Kapil was found wanting as he couldn t manage the amount of work load expected by his coach. The coach recommended Kapil to have a lot of milk. The legendary cricketer s father bought a buffalo and the rest as they say is history.