The Prithvi Shaw-led Indian Under-19 team produced an all-round performance to beat Australia by eight wickets in the finals of the U-19 World Cup.

New Delhi: Board of Control for Cricket in India (BCCI) acting president C.K. Khanna on Saturday heaped praise on colts for lifting the record fourth ICC Under-19 World Cup title, saying that the win has shown that India’s supremacy was not only limited to senior cricket. The Prithvi Shaw-led Indian Under-19 team produced an all-round performance to beat Australia by eight wickets in the finals of the U-19 World Cup which took place at the Bay Oval ground in Mount Maunganui. Ecstatic with the side’s victory, Khanna said India have shown that their supremacy is not only limited to senior cricket and that they could achieve glory in the junior event as well.

“It is a moment of joy and pride for the Indian cricket as the junior cricket team which have (has) clinched the World Cup by defeating Australia. It is a great moment for us. We have shown that our supremacy is not only in senior cricket but in junior also. Well done boys. Keep it up,” Khanna told ANI. Indian opening batsman Manjot Kalra grabbed the eyeballs with his unbeaten 101-run knock as the Men in Blue chased down the target of 217 in just 38.5 overs. It was an all-around performance from the Men in Blue as the spinners sent shivers through the Australian batsmen’s spines with their magical spell, followed by a magnificent show with the bat.

Skipper Prithvi Shaw (29) and Kalra gave India a strong start before rain interrupted the play in the fourth over. Coming to bat at number three spot, swashbuckling batsman Shubman Gill, who had scored a ton in the semifinal against Pakistan, was cleaned up by Param Uppal on 31. However, Kalra remained rooted on the crease, along with Harvik Desai (47), to guide as India chased down the target of 217 in just 38.5 overs.

For Australia, all-rounder Jonathan Merlo became the highest scorer with his 76-run innings after the Indian blowers ripped through their top-order. Kamlesh Nagarkoti was the pick of the bowlers for India with three wickets while Ishan Porel and Shivam Mavi bagged two wickets each. Manjot Kalra was adjudged as ‘Man of the Match’ while Shubman Gill was awarded ‘Player of the Tournament’. 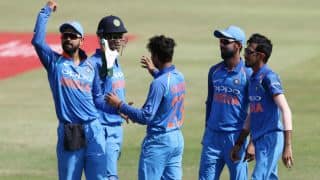