Hello and Welcome to CricketCountry’s live coverage of  the 12th match of ongoing Celebrity Cricket League (CCL) 2016. The 12th game will be played between Telugu Warriors and Karnataka Bulldozers at Uppal Stadium in Hyderabad. This is the final league match of the tournament. The clash is expected to be very interesting as both the teams have emerged as strong teams in this season. They are currently at No. 1 and 2 position in Group B rankings. If Telugu Warriors win the match, they will surely qualify for the semi-finals. If they lose some other probabilities will come into play. Telugu are the defending champions having won CCL 2015, which was the fifth season of the league. The two semi-final matches are tabled for the coming Saturday i.e. February 13. Final will be played next day between the two teams which shall win their respective semi-final games.

Live Cricket Score, Telugu Warriors 204/5 in 20 Overs | Target 210 | Batting: Kishore 8(6), Ashwyn 24(10) | Telugu Warriors fall just five runs short of equalling Karnataka Bulldozers score of 209. It was a nail-biting encounter in which Karnataka finally had the last laugh. Ashwyn was the key wicket. If he had stayed till the very end, Telugu could had certainly won the game. OUT! Ashwyn run-out Sudeep 74(30)

Live Cricket Score, Telugu Warriors 146/4 in 15 Overs | Target 210 | Batting: Nandakishore 8(6), Ashwyn 24(10) | Both, Akkineni Akhil and Sudhir Babu are back in the hut. Sudhir was unlucky to get out just one run short off his fifty. Warriors now require 64 runs from 30 deliveries. It is achievable but still quite difficult to get. Present batters have to hit big shots but at the same time also ensure that they do not lose a wicket. OUT! Akkineni Akhil c Pradeep b Mahesh 17(14), OUT! Sudhir Babu c Prasnna b Mahesh 49(36)

Live Cricket Score, Telugu Warriors 97/2 in 9.3 Overs | Target 210 | Batting: Akkineni Akhil 3(3), Sudhir Babu 45(29): Skipper Akkineni Akhil has come to the middle after the fall of Sachin Joshi. Sudhir Babu needs five more runs to get to his fifty. Warriors now require 113 more runs from here onwards from 63 balls and they have eight wickets remaining . The task is tough but as long Sudhir is batting, it is very much possible. OUT! Sachin Joshi c Jayaram Karthik b Dhruv Sharma 16(11)

Live Cricket Score, Telugu Warriors 37/0 in 3.1 Overs | Target 210 | Batting: Sachin Joshi 16(10), Sudhir Babu 18(10): Telugu Warriors are off to a flying start and they have not lost any wicket so far. They are chasing a huge target and hence still have a long way to go. Telugu are the defending champions and would want to win this season as well. Can they win this all-important match? A lot of action is still remaining, fasten your seat-belts before the journey begins. Telugu have some cracking batters in their lineup capable of chasing down scores in excess of 200 but it’s important that they deliver today.

Live Cricket Score, Karnataka Bulldozers 209/2 in 20 Overs | Batting: Pradeep 82(56), Rajeev 19(6): Dhruv Sharma departs after a brisk 74 at a strike rate of just a shade under 200. Pradeep remained unbeaten on 82 off just 56 balls. He hit four boundaries and five sixes in his knock. It has been some exemplary batting by Karnataka in the last 10 overs. They smashed 140 runs in the last 58 balls which is simply phenomenal considering they were batting at a snail’s pace till the 10th over. This was made possible by both Dhruv and Pradeep. OUT! Dhruv Sharma c Prince b Ashwyn 74(38)

Live Cricket Score, Karnataka Bulldozers 133/1 in 15 Overs | Batting: Pradeep 63(42), Dhruv Sharma 41(28): Both the batters have struck a rapport and are batting well in tandem. Pradeep has went past his fifty while Dhruv is just nine runs short of his half century. Karnataka Bulldozers have smacked 64 runs in the last 28 balls, which is pretty awesome. If they continue to bat at this rate, they can certainly reach the 200-run mark or somewhere close to it.

Live Cricket Score, Karnataka Bulldozers 69/1 in 10.2 Overs | Batting: Pradeep 45(30), Dhruv Sharma 7(12): Kiccha Sudeep got out for 11 off 20 balls. Dhruv Sharma has replaced him in the middle. Pradeep is batting at a brisk pace. He has already hit three boundaries and two shots which dispatched the ball over the ropes. Karnataka have to up the tempo now. The rate at which they are batting is certainly not conducive to Twenty20 cricket. Seeing the batters body language, it appears that they may soon change their batting gear. OUT! Kiccha Sudeep c Samrat b Sachin Joshi 11(20)

Live Cricket Score, Karnataka Bulldozers 36/0 in 5 Overs | Batting: Pradeep 19(13),  Kiccha Sudeep 11(17): Prince and Raghu have opened the bowling for Telugu Warriors. Both the openers— Pradeep and skipper Kiccha Sudeep have given their team Karnataka Bulldozer a slow but steady start. They took their time to settle down. But at the same time the opposition too bowled some special stuff. Pradeep hit a six in the last ball of the fifth over, making his intentions clear that he will not wait any longer and is willing to cut lose. It’s an opportunity for a wicket or we may see some big hits as well.

Both, the semi-finals and final matches will be played at the same venue, at Uppal Stadium in Hyderabad. This is the sixth season of the league. Chennai Rhinos won the first two seasons followed by Karnataka winning the next two while the previous year’s tournament as stated was won by Telugu Warriors. Thus, all the three winners in this league have been teams from the south. This year as well, both Telugu and Karnataka are strong contenders for the crown along with Bhojpuri Dabanggs of Group A. Nine teams have participated in the league so far; the qualification being that the team must have featured in the league at least once. Veer Marathi franchise is not playing the sixth season of CCL. It is replaced by Punjab de Sher. 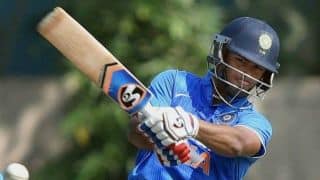 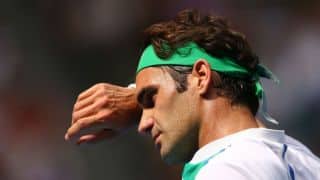