Tendulkar loves to impose himself on the opponent: Webster

Tendulkar loves to impose himself on the opponent: Webster

Newly-appointed West Indies team psychologist Rudi Webster is a Sachin Tendulkar fan and he admires the champion batsman for his ability to impose himself on opponents, situations and conditions. 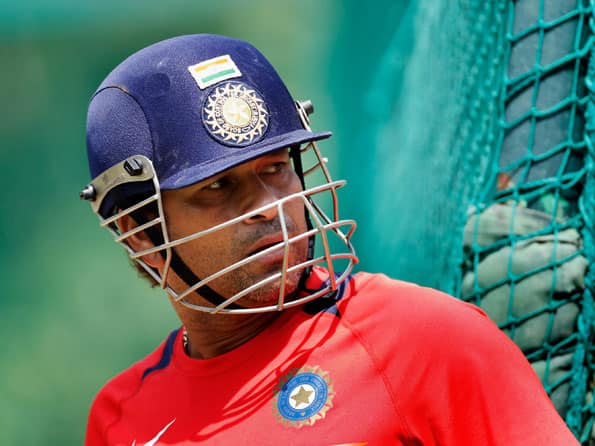 Psychologist Rudi Webster says, Tendualkar, like any great sportsman or businessman, finds a way to challenge himself Getty Images

Newly-appointed West Indies team psychologist Rudi Webster is a Sachin Tendulkar fan and he admires the champion batsman for his ability to impose himself on opponents, situations and conditions.

“Sachin, like any great sportsman or businessman, finds a way to challenge himself. He finds a way to get on top of tricky situations and conditions. But only the very best can manage so,” said the genial Webster, who has been roped in by the West Indies Cricket Board (WICB) to boost the team ahead of the second cricket Test against India beginning here on Tuesday.

India are 1-0 up in the series by virtue of their 63-run win over the hosts in the first Test at the Sabina Park in Kingston, Jamaica last week.

Webster feels cricketers must know when to let the storm pass and then get on top of situations – a quality which he terms as “flexibility of mind.”

“Others must know to spot the situation which needs different responses. They should have that intense concentration to know when they must play against their natural instincts. They must challenge themselves to be flexible,” he said.

“Australians, for example, never needled Lara. Lara was an extremely dangerous opponent. As for others, like Sir Garfield Sobers once said, mind more than skills make a difference in their careers.

“There has to be a reason why incredibly talented cricketers don’t make it to the top while lesser cricketers achieve more than their skills deserve,” he added.

“Virender Sehwag is one another incredible talent. I haven’t seen many who can time a cricket ball better than him.

He too is a cricketer who loves to impose himself on a cricket field. But he would be still a better batsman if he respected conditions and opponents once in a while,” he said.

“Yuvraj Singh is another. Not just as a one-day batsman but I feel he should have really made it big in Test cricket.

It’s just not his timing, his entire talent as a cricketer is striking,” feels the Englishman, who played first class cricket for Warwickshire.

Webster now has the responsibility to make the West Indies team punch above their weight against the Indians in the second Test.

The hosts have some incredibly talented cricketers like Darren Bravo and Adrian Barath, to name a few, but they are unable to string together good performances on a cricket field consistently.

West Indian skipper Darren Sammy feels there is very little difference between the two sides and it is upon Webster now to make the Caribbean players mentally tough.

“Mr Webster is primarily working with our batsmen. He is trying to get their confidence up. Hopefully, we will see the result in this Test,” he said.

“If batsmen bat with confidence and compliment our bowlers, we would be alright.

“We haven’t handled pressure situations well. At key moments, we have suffered collapses. There is something which affects us. When we are in good position, we suddenly tend to lose it. We need to be mentally strong not to crumble under pressure,” remarked Sammy.