Should a national selector role become available, Gillespie said he'd be "very interested" in exploring it.

Former Australia fast bowler and Yorkshire coach Jason Gillespie has offered his services as an Australia selector in the future, while stressing on the need for clarity in dialogues about selection with current national cricketers.

Speaking on the latest episode of The Unplayable Podcast, the retired Australia pace bowler said he would be very interested in a national selector role.

“I’d certainly love to be involved in selection at some point in the future,” said the 43-year-old. “It’s certainly a challenging role and it’s not to be underestimated how challenging it is. You only have to look at recent times, with the 50-over domestic one-day competition in Australia is played very early in the season. And then players are being selected almost on the back of Big Bash form, because it’s hard for the selectors to judge how a player is going in 50-over cricket when there hasn’t been 50-over cricket played for four-five months.

“That’s just one of many challenges that selectors have to go through. I’d be open to discussing that in the future at some point. Right now, I’m very focused as a coach of the Adelaide Strikers and coach of Sussex County Cricket Club in the English County Championship.”

Since retiring from cricket in 2008, Gillespie has forged a reputation as a successful coach, predominantly with Yorkshire whom he steered out of Division Two of the County Championship in his first season and then to the title in 2014 and 2015. Yorkshire were also runners-up in Gillespie s second season as coach and then in 2016 narrowly missed a third successive Championship title.

In 2016, he served as assistant coach to Justin Langer for three T20Is between Australia and Sri Lanka and in 2017 was briefly interim coach of Papua New Guinea. Under Gillespie, Adelaide Strikers lifted the Big Bash League trophy earlier this year, and he has been credited for pushing Travis Head and Alex Carey, the current T20I vice-captain and wicketkeeper, into the Australian team.

Most recently, Sussex finished runners-up in the T20 Blast this season and third in the County Championship Division One under Gillespie s watch.

Looking at Australia s next Test series against India in December, Gillespie, who took 259 wickets in 71 Tests, said that clarity was critical when communicating to players why they had been selected and why the had been left out or dropped.

“I think the absolute key is the messages that come out after the selections have been made, and the clarity of the communication to all players around the country in terms of how guys have been selected (and) why they’ve been selected, he said. “For me, that’s the absolute key and I’m sensing that’s been a bit of an issue in the past with players around the country. They’re not sure how much value is actually been placed on Sheffield Shield performances.

“I think that’s something that the selectors can look to address if they haven’t already done that. We don’t know, they may have done that. But certainly that clarity on selection criteria and how important Sheffield Shield performances are for selection into the Australian cricket team (is important). 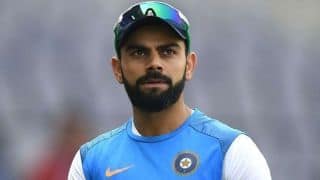