Mitchell Starc has welcomed the competition for the fast bowler's spots in the Australian team but he's not worried about selection.

Mitchell Starc has welcomed the competition for the fast bowler’s spots in the Australian team but he’s not worried about selection as he begins his quest to make a strong impression for the Pakistan Test series in November.

Starc played in just one of the five Tests of Ashes series in England that ended 2-all. During his time away from international cricket, through injury, he has been sweating it out in the nets, polishing new tricks and now wants to get into the thick of the action as much as possible.

From Thursday, he will turn out for New South Wale against Queensland in Sheffield Shield, Australia’s domestic first-class competition. “I’ve had plenty of time in the nets in the past five months, so I am trying to get out in the middle as much as I can,” Starc said. “This week is a great opportunity to get out in the middle and hopefully take some wickets. That (Aussie selection) is the furthest thing from my mind.”

Starc will be vying for a place in the upcoming home series against Pakistan and New Zealand and is hopeful the helpful wickets in Australia will offer him a better chance at laying his claim. “The wickets throughout the summer in general are a little bit harder and quicker. Extra air speed comes into it a bit more than it does in the UK. Hopefully I’ve still got a bit of that up my sleeve and can come into the fold throughout the summer,” the 29-year-old said.

While he might not have played as many Tests in England as he would have wanted to, Starc said it was something he was prepared for even before the Ashes got underway. “Right from the start (of Ashes) we knew it was a squad mentality and they were going to look at conditions for each Test match,” Starc said. “The way they saw the make up of the team it was just for Manchester. We had six fast bowlers at one time ready to go. Hopefully we’re all fit for the summer and fighting for positions again,” he said. 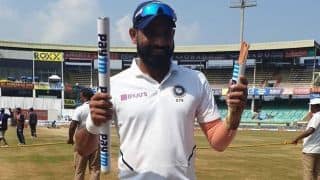