Tharindu Kaushal was reported and charged for a suspected illegal bowling action.

Sri Lankan off-spinner Tharindu Kaushal was reported and charged for a suspected illegal bowling action following India‘s victory over Sri Lanka in the third and final Test at the Sinhalese Sports Club (SSC) in Colombo on Tuesday. The match officials, who handed the match report to the ICC suspected that the 22-year old’s delivery was not legimate and was suspected to be illegal. Kaushal’s bowling action is now supposed to be closely monitored by the ICC under the rules of the reported suspect actions across all the three formats. He is also slated to undergo a clearence test at a ICC accredated testing center within 14 days. However, he could continue to ball in international cricket till the test results are out. He is expected to undergo the test at the Sri Ramachandra University in Chennai, reports icc-cricket.com. Scorecard: India vs Sri Lanka, 3rd Test at Colombo

There was good news for several Sri Lanka players following their 63-run victory over India in the first Test, with career high gains for Dinesh Chandimal and Kaushal as Rangana Herath also helped inspire the hosts to an unlikely victory. At Galle, Kaushal bowled extremely wayward line and length and also at a fast pace. He should have learnt from his Indian counterpart Ravichandran Ashwin, who gave the ball good flight and kept pecking away at the batsman outside off-stump at either good or full length. Kaushal bowled half-volleys and full tosses very often, and the Indian batsmen, especially Shikhar Dhawan and Virat Kohli found it easy to score. He rectified it post lunch and that paid dividends for him and his team which is indeed incredible. Tharindu Kaushal must be given a longer run for Sri Lanka’s benefit 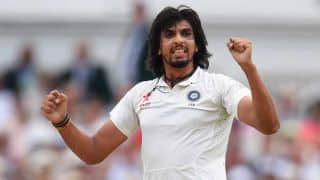