Mark Stoneman stood tall against Australian bowlers' barrage of short deliveries on Day One of the third Test at Perth.

There was not enough swing to help the Australian pace trio Mitchell Starc, Josh Hazlewood and Pat Cummins at Perth. Aided by a hard wicket, the star-studded Australian quicks fought hard to extract maximum bounce from the hard wicket. Australian wicketkeeper Tim Paine credited the pacers and Hazlewood in particular, after the end of Day One of the third Test versus England. He also praised England opener Mark Stoneman for his gutsy knock amidst a barrage of short deliveries at his disposal.

“The spell from Josh (Hazlewood) was as good as you would see. It looked pretty quick and he hit a good area. Every time he bowled a bouncer, it seemed to hit the money. Hazlewood really tried to work him (Stoneman) over. He (Stoneman) stuck it out and gutsed it out,” said Paine.

Stoneman scored 56 off 110 balls including 10 fours. Australian pacers kept him under the pump with plenty of short deliveries, but he did not bog down.

“No one goes out trying to drop catches but when the wicket is that flat for our bowlers then it certainly is disappointing. It just happens, you drop catches sometimes,” added Paine.

Australia dropped two catches and were shabby throughout the day.

“I heard briefly about it (the spot-fixing allegations) this morning. All our guys have been educated about it for a long time. We know what is right and wrong,” concluded Paine. 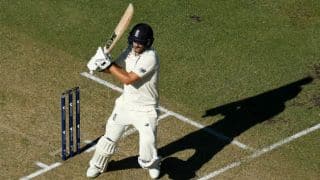