England lost two early wickets with defeat looming at tea on day four of the fifth Test on Sunday after Australia declared holding a massive lead.

England lost two early wickets with defeat looming at tea on day four of the fifth Test on Sunday after Australia declared holding a massive lead. Australia called a halt to their epic first innings at 649 for seven, a lead of 303 runs, and soon had England in trouble in their second innings after the tourists had been cooked in the field for more than two days. Mark Stoneman was leg before wicket to Mitchell Starc for a duck and lost a review in the process, and next ball Alastair Cook was put down at first slip by Shaun Marsh off Josh Hazlewood for five.

But Cook’s reprieve did not last long and he was bowled for 10 when a sharp Nathan Lyon turner hit the top of off-stump in the off-spinner’s first over. Cook, who became during his innings only the sixth batsman to score 12,000 Test runs, finished the series with 376 runs at 47. At tea, England were 25 for two with Joe Root on eight and James Vince not out six. Shaun and Mitchell Marsh earlier became the third set of brothers to score centuries in the same innings for Australia.

The Marsh boys joined Greg and Ian Chappell and Steve and Mark Waugh to score brotherly centuries for Australia, while it was the eighth time overall it had happened in Test cricket. The Chappells were the first Australian brothers to notch centuries in the same innings at The Oval in 1972 with the Waughs the last to do it against England, also at The Oval, in 2001. Mitchell Marsh almost threw away his century in all the excitement as he embraced his brother mid-pitch before he had completed the second run and needed to scramble back to his crease to avoid being run out.

Mitchell Marsh was bowled next ball by Tom Curran for 101 off 141 balls with 15 fours and two sixes. The century came after his 181 in the third Test in Perth. He was the third centurion of the massive Australian first innings total, following Usman Khawaja’s 171 on Saturday. Shaun Marsh was eventually dismissed shortly after lunch, run out for 156 by Stoneman’s direct throw from the covers.

He had batted for 403 minutes and faced 291 balls for his second century of the series and sixth overall in his 28th Test. Starc slogged Moeen Ali for six and was out the next ball finding Vince at long on for 11. Tim Paine (38) and Pat Cummins (24) were at the crease when Steve Smith called them in about an hour before tea. James Anderson bowled with great economy in the stifling conditions as temperatures hit 40 Celsius (104 Farenheit), taking one for 56 off 34 overs. Spinners Ali and Mason Crane conceded a combined 363 runs in taking three wickets between them. 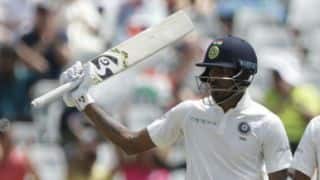