England seamer Jake Ball is in doubt with an ankle injury for England’s final Ashes warm-up game in Townsville next week, team officials said on Saturday. The Nottinghamshire paceman had scans which revealed a right ankle ligament strain after a tumble while bowling on day two of the four-day tour match against a Cricket Australia XI at the Adelaide Oval on Wednesday.

The England medical team will assess the injury over the next week and he will play no further part in the Adelaide match, a team spokesman said. National selectors have called up England Lions and Sussex left-arm seamer George Garton as cover for Ball for Wednesday’s final four-day warm-up match ahead of the first Brisbane Test, starting on November 23.

The Lions fly into Brisbane on November 14 for a two-week camp with a red-ball focus, culminating in a three-day match against a Queensland XI from November 27-29. Pace bowler Steven Finn was ruled out of the Ashes tour earlier this week with a knee injury and was replaced by Surrey’s Tom Curran.

Stuart Broad, James Anderson, Craig Overton, Chris Woakes and Curran are the only fit fast bowlers in the England squad. 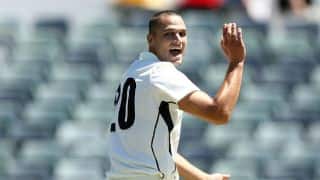 The Ashes 2017-18: Nathan Coulter-Nile ruled out due to back injury