Injured Moeen Ali and Steven Finn remain unavailable for England‘s second tour game in Adelaide, coach Trevor Bayliss said on Tuesday, missing the chance to prepare for the day-night Ashes Test in the city. Bayliss said all-rounder Ali (side strain) and fast bowler Finn (knee), who also missed England’s drawn opening tour game in Perth, will sit out the four-dayer under lights against a Cricket Australia XI, starting on Wednesday.

“Finn is still not right, we won’t know about him for another couple of days yet,” Bayliss told reporters in Adelaide on Tuesday. “Mo Ali is more precautionary now, we will just leave him out of this one and make sure he’s right.”

Bayliss also said he was uncertain over one batting spot and another fast bowling option for the first Test starting in Brisbane on November 23.

“We have probably got a batting spot to finalise and probably a fourth pace position so there’s a little bit of competition from within which is good,” Bayliss said.

England have one further four-day warm-up game in Townsville from November 15 before the first Test.

Bayliss said the team was focused on becoming familiar with the day-night conditions and playing with a pink ball ahead of the second Test at Adelaide Oval.

England have only played one day-night Test, which they lost to the West Indies last August.

“We have got this (Adelaide) game to see what happens with the pink ball and for our guys to experience it with a view obviously to that (day-night) second Test,” Bayliss said.

“If the ball moves around a little bit more, that is what we like to see more of.

“Our batters are more used to playing on wickets that do a bit more sideways and obviously the bowlers bowling on it as well, moreso than the Australian guys.”

Former Test fast bowler Ryan Harris, coach of the CA XI team, said he wants to send the tourists to Brisbane low on confidence and with as little insight as possible into batting against the pink ball.

“I know going into these sort of tours your warm-up games can set the tone for the tour, you don’t want to lose. Our job is to make it as tough as we can,” Harris told reporters.

Harris said he wants to reduce batting opportunities for England during the twilight period that has proven prohibitive for batsmen.

“We are not here to make it easy for England,” Harris said.

“When it gets to dusk the grass almost seems to sit up and it zips around. It can be tough to bat around that time.

“That is where we will make it as hard as we can for England. Hopefully they are not batting around that time, that is my plan.” 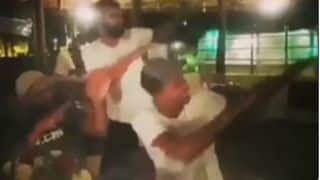 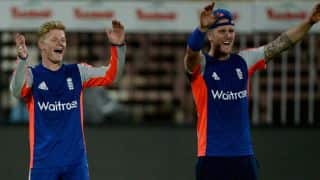