Steve O'Keefe broke a digit on his right hand during a local tour match and is advised to miss six weeks of cricket.

It is not just England, who are facing woes ahead of The Ashes 2017-18 with the whole Ben Stokes saga. Australia too have a few injuries issues to figure out ahead of the marquee clash of the year. After Ashton Agar and Jon Holland, now Steve O Keefe finds himself in familiar territory.

O’Keefe broke a digit on his right hand and has been advised rest six weeks of cricket. The 32-year-old sustained a break to a finger during grade cricket for Manly on the weekend.

O Keefe will be missing initial three rounds of the domestic 50-over cup that leads into the Ashes 2017-18. Sadly for Australia their leading spinner in the Test arena, Nathan Lyon is also in trouble with a sore shoulder. He was ruled out of the New South Wales and Victoria clash on Sunday. It was however a precautionary measure.

Agar is currently recovering from a surgery that he underwent after breaking his finger during Australia’s tour of India, while Holland underwent a knee surgery for “wear and tear. The first Test will begin on November 23 at Brisbane.

Both O’Keefe and Agar will now be targeting the day-night Ashes Test at Adelaide Oval, Adelaide. 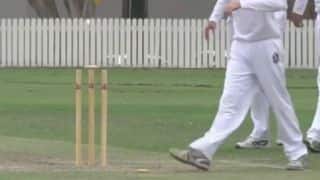