Asha Bhosle is known as one of the most versatile singers in the history of Indian singing. But very few people know about her interest and passion for cricket. 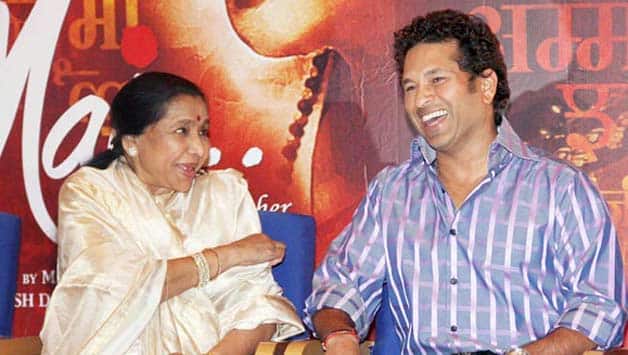 Sachin Tendulkar (right) has come to inaugurate my albums on more than one occasion and has even modeled for my boutique, but never has he charged a fee for doing so, says Asha Bhosle. Picture courtesy: Bollywoodlife.com

Asha Bhosle is known as one of the most versatile singers in the history of Indian singing. But very few people know about her interest and passion for cricket.

“I have been watching cricket from 1956 onwards. In fact, I vividly remember watching Subhash Gupte bowl at the Eden Gardens in Calcutta, picking up a lot of wickets against the West Indies in 1958. I also remember enjoying Vijay Manjrekar and Polly Umrigar bat for India in the 1950s and ’60s. Thereafter, I have seen and enjoyed Vivian Richards for the sheer aggression that he brought to the game.”

Talking of Sachin Tendulkar, Asha told Outlook magazine: “If Richards was aggression personified, our very own Sunil Gavaskar was all class and elegance. And it wouldn’t be wrong to suggest that Sachin Tendulkar is a combination of both these legends. He is equally good in attack and in holding on to his wicket — a rare quality in any batsman. He has dominated world cricket for more than two decades and has allowed us to speak of an Indian in the same breath as Sir Donald Bradman.”

Asha knows Tendulkar from the time he was smashing the finest bowlers in the country as a school kid. “I first heard about Sachin Tendulkar when he was 15. Raj Singh Dungarpur mentioned him to me and suggested that here was a Bombay kid who was special. Thereafter, my son-in-law [Hemant Kenkre] kept on raving about him and even told me about Sunil Gavaskar presenting this kid with a pair of his pads. Needless to say, I was curious to see him bat,” said Bhosle.

“And when I did — at the first opportunity, during his debut series in Pakistan in 1989 against the likes of Wasim Akram and Imran Khan — I realised that all that was said about him was justified. He was simply exceptional,” recalled the singer.

“His batting is like Lata Mangeshkar’s melodies, timeless and immortal. You can keep on seeing the videos and yet you will want to see more. Just as you like listening to Lata Mangeshkar songs at any time of the day, you’d like to watch Sachin Tendulkar play for India wherever you are. That’s why I call him cricket’s supreme artiste,” said Asha.

Asha added: “I’m currently 80 years and seven months old. Yet I am on my feet at least 12 hours a day. I keep myself busy with my performances, my boutique and my recordings. For me, there’s retirement only in death. We have been born to work hard and that’s what I have always done. I wish Sachin keeps on doing the same. Cricket is his arena and there’s no way he should ever leave his arena and walk away.”

Asha felt obliged to offer Tendulkar her personal gratitude. In this day and age when achievers of Tendulkar’s stature charge a hefty appearance fee for anything they do, he has never asked her for a single penny ever. “He has come to inaugurate my albums on more than one occasion and has even modeled for my boutique, but never has he charged a fee for doing so. Such generosity is unheard of in today’s age. In fact, whenever I have asked what I should give him to compensate for his time and efforts, he has laughed it off and
suggested that I should give him something very personal of my own. Accordingly, I have given him the paper in which I had written out the song In aankhon ki masti at the time of my recording. I had it framed and presented it to him and he tells me that he will soon put it up in his music room in his house in Mumbai,” revealed Asha.

Wishing him on his 40th birthday the multitalented singer says: “He is a real gem of a man in every sense of the word and I take great pride in knowing him well. Here’s hoping he has a great 40th birthday.”