Outgoing coach Mickey Arthur was disappointed that the people he trusted within the Pakistan cricket set-up did not back him at the time of need and eventually made the decision to not extend his contract as Pakistan’s head coach. Former coach Arthur’s three-year stint with Pakistan was up after the World Cup but he had expressed his desire to continue.

ALSO READ: Mickey Arthur disappointed and hurt after being sacked as Pakistan coach

“I guess the only disappointment I have out of the whole lot is that there were some people I really trusted who ultimately didn’t follow through,” Arthur told ESPNcricinfo’s Stump Mic podcast. “I’m not talking about the hierarchy, I’m talking about people on the cricket committee that I did trust who sort of said one thing and ultimately did another. So that was the disappointing aspect of it.”

The committee also included PCB chief executive Wasim Khan, senior officials and former players Haroon Rasheed, Zakir Khan, Mudassar Nazar, and former women’s captain Urooj Mumtaz, but it was Misbah and Akram’s names that Arthur had recommended when the committee was being brought together.

“I said Misbah would be outstanding because he was a godfather of Pakistan cricket and he is – Misbah is an outstanding individual make no mistake about that. And I sort of said, I thought Wasim Akram would be good to get on the committee because I think Wasim just understands the international game so well. He carries a huge stature in international cricket.

“Those were guys I endorsed and guys I really enjoyed. As I say, they had a job to do and they decided it was in the best interests of Pakistan cricket to go with a fresh set of eyes. And it just happened to be that Misbah was on the committee that didn’t renew our contracts and becomes this heir-apparent. Ultimately Misbah will do a good job, Misbah is a good guy and Pakistan cricket made their decision. I was disappointed because I loved every second of that job.”

Arthur revealed that after Pakistan failed to make the semifinals of the World Cup, the decision was taken during a five-hour long meeting with the PCB in August. But it was the manner in which fingers were pointed at Arthur during the session that upset him.

“A lot of it was spoken about it in hindsight – some of the selections etc etc, which was all in hindsight. And it’s always easy to speak in hindsight. And a lot of the information that they told me was actually factually incorrect. And [that was] I guess the information they ended up making their decision on. But, again, I just want to say it was a great time. Yes, I was disappointed but at the end of the day, I had three fantastic years with Pakistan.”

That said, Arthur added he has no regrets and rather proud of what he’d achieved. Under Arthur, Pakistan became the No.1-ranked Test side and currently lead the T20I rankings. In 2017, Arthur led Pakistan to their maiden Champions Trophy win when they beat India by a 180 runs in the final at Lord’s. The positives outnumber the setbacks.

“Yeah, I’ll make no bones about it, I would’ve liked to have gone on, because we had just built a team,” he said. “It had taken us three years to get to where we needed to be. Our T20 team was going along beautifully, No. 1 in the world, our ODI team, we had played a lot of young players who were just coming to the fore and I think we saw at the backend of the World Cup how exciting we could be as a team. And the challenge was going to be to build a new Test team, so there were a lot of interesting challenges out there with Pakistan. I was so looking forward to maybe carrying on for just a little bit extra.” 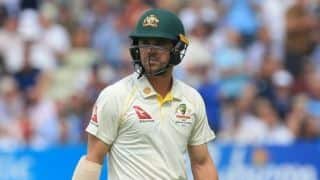