The regret of the World Cup's youngest player

The regret of the World Cup's youngest player

Sixteen-year-old schoolboy Nitish Kumar became the youngest ever World Cup player on Monday, but his only regret was that his father, killed in a 2005 car crash, was not there to see it. 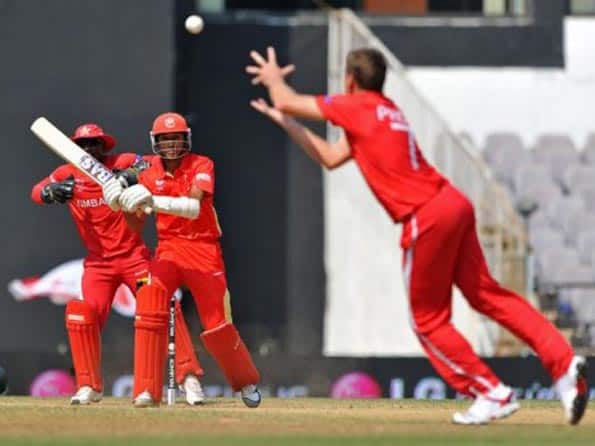 Zimbabwe bowler Ray Price (right) takes a catch to dismiss Canadian cricketer Nitish Kumar (centre) during the ICC Cricket World Cup 2011 match at the Vidarbha Cricket Association Stadium stadium in Nagpur. Sixteen-year-old schoolboy Kumar became the youngest ever World Cup player, but his only regret was that his father, killed in a 2005 car crash, was not there to see it.

Sixteen-year-old schoolboy Nitish Kumar became the youngest ever World Cup player on Monday, but his only regret was that his father, killed in a 2005 car crash, was not there to see it.

The teenager was named in Canada’s team to face Zimbabwe and at 16 years and 283 days, supplanted Bangladesh’s Talha Jubair, who was 17 years and 70 days old when he featured against the West Indies in the 2007 World Cup.

But his debut was tinged with sadness. His father Vikal was killed in a car accident in England while on a cricket tour in 2005 with Kumar, 11 at the time, in the back seat.

He was hospitalised for almost a month and did not learn of his father’s death until returning to Canada. “It would have been easy for me to pack it in,” Kumar told the Toronto Star newspaper.

“My father wanted me to play at the highest level and where I am now is because of him, my family and my coach. Without them, I’d be lost. There was a time when I would play for myself, but now I play for my father.” Sadly, Kumar’s World Cup debut was not particularly memorable.

After Zimbabwe had made 298 for 9, the opening batsman, who has been given a month off by his school to take part in the World Cup, was out for just one after facing only 10 balls. Canada were dismissed for just 123 to lose by 175 runs.

But captain Asish Bagai defended the decision to give Kumar his chance. “We had told Nitish to enjoy his game. We don’t have any expectations from him. That will be too much of a pressure for a youngster. He still has a long way to go and will surely learn with experience,” Bagai said.

Before the World Cup, Kumar had played five ODIs for Canada, making his debut against Afghanistan in Sharjah in February 2010.

Nicknamed ‘Tendulkar’, he was born in May 1994, four-and-a-half years after Sachin Tendulkar’s international debut against Pakistan in 1989. Canada have the oldest and youngest player in the tournament with the oldest, 40-year-old John Davison, opening the batting with the youngster.

“The first time I saw Nitish was 10 years back when he was only six. I was amazed to see a six-year-old’s control over his shots. Even at that age, he could hit pull shots and I felt he was a special talent,” Davison said.